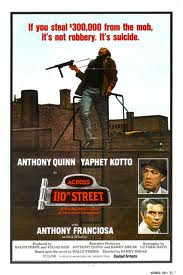 Not so much a blaxsploitation film as it is just a damn fine movie and a perfect film to end the month.  One of my favorites from the 70's, a decade that is my favorite.  To me, this holds up as well as The French Connection, Chinatown, Dirty Harry, and Dog Day Afternoon.

Yaphet Kotto and Anthony Quinn bring serious chops as two cops trying to break the case when three criminals decide to knock off the mob.  They might not like each other, but they've got to get along long enough to keep Harlem from tearing itself apart.

Fantastic character actors bring alive a story that could have fallen into numerous pitfalls, and the on location shooting adds much needed realism.  Adapted from Wally Ferris's novel by writer Luther Davis and director Barry Sheer, this film just oozes with authenticity.  Anyone wanting to know what NYC was like in the 70's should take a look at Across 110th Street.