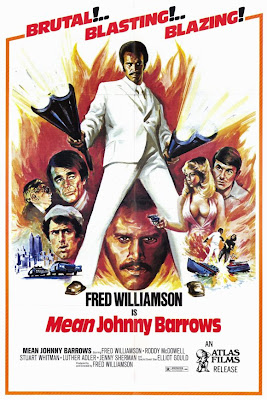 When a movie begins with a Vietnam GI almost blowing up and then punching a superior officer, it gives one high hopes.  When that grunt is a take-no-shit Fred Williamson, expectations are raised even higher.  Unfortunately Mean Johnny Barrows fails those hopes and dreams in every way.

Williams is Mean Johnny Barrows, a complete misnomer since he spends the majority of the film going out of his way to be nice.  He smiles politely at the mob boss who offers him a plate of spaghetti and a job after he wanders into a restaurant kitchen.  He grins and bears it as a racist ass works him as a gas station janitor for the better part of the month.  Only when he's paid a meager $21 for the work does he flash some very weak kung fu and attitude.

Mostly what Johnny Barrows does in this film is nothing.  Seriously.  For 4/5ths of the film people try to get him in on the fight between two hilariously stereotypical mob families, the Da Vinces and the Raconnis.  He stays out of it until the girlfriend of Mario Raconni, the blond haired bombshell , is "raped" by Tony Da Vince (Roddy McDowall).  It's all part of an elaborate scheme that Barrows completely falls for, and for an action packed twenty minutes Williamson actually does some killing.

But it's too little, too late.  By the time Williamson takes revenge, I was bored.  The script was awful, and the direction, a debut by Williamson, was clumsy.  The only bright spot in this film was a completely unnecessary, but highly entertaining cameo by Elliot Gould.  His homeless, but highly fashionable tramp, Professor Theodore Rasputin Waterhouse, "teaches" Barrows how to be honorable vagrant even as they con a man out of a hot dog.

If you do make it past that scene and all the way to the ending, you might be pleasantly surprised by the silliest Kung Fu fight I've ever seen outside of a Dolemite film, and a big bang of a finale, but I'd recommend just fast forwarding until then.  You'll thank me.