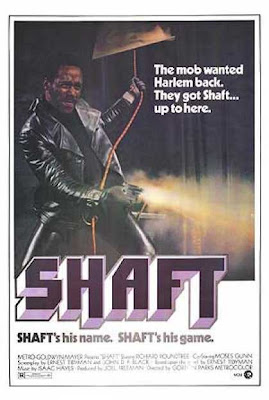 Is there a better opening theme song in the history of cinema?

After Sweet Sweetback's Baadasssss Song, Shaft is considered the beginning of the blaxsploitation movement.  Unlike SSBS, Shaft is actually a pretty solid film.

John Shaft is a private investigator hired by gangster Bumpy Jonas to find his kidnapped daughter.  Like Sweetback, Shaft is a bad mother (shutting my mouth), and he's going to do the right thing, despite his strong dislike for Bumpy.  As the case unfolds he finds himself up against first the black gangsters, than the black power movement, and finally, after forming a superteam with the previous two, the Italian gangsters.

Unlike most other films from this genre, Shaft is relatively free of unintentional humor, and the direction from acclaimed photographer Gordon Parks is solid.  Shot on location in New York, it drips with authenticity, from the accents to the 70's color schemes.  And Richard Roundtree build his entire career on this star-making film.  From his badass attitude to his suave style with the ladies, every blaxsploitation leading man did their best to follow his lead.

Perhaps most importantly, from it's meager million dollar budget, it went on to earn over twelve million, proving the genre to be finanicaly feasible to the hollywood bean counters.  And much like today, sequels were quickly lined up.