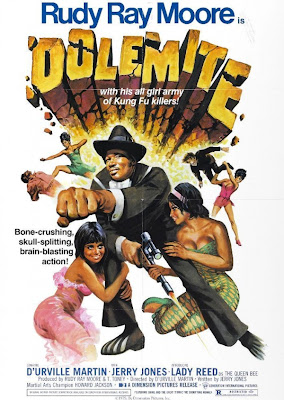 Dolemite: You forgot about the white ones."

Word of warning before viewing any Dolemite related picture.  Before the likes of 50 cent, P Diddy, DMX, Ice T, LL Cool J and all the other rappers turned actors, there was Rudy Ray Moore, comedian.  Dolemite was an alter ego created for comedy albums, much like Richard Pryor's wino.  He was never meant to be an action star, just a way to sell more albums.  Please consider that as the movie starts. 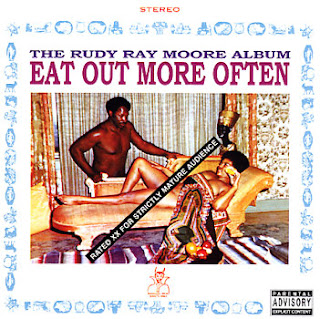 You are now safe to view the picture.

These are words I wish I heard before the first time I ever saw Dolemite.  I was fourteen, had only heard of Dolemite thanks to Robin Harris's rants in House Party.  But I'd already seen Shaft and Superfly.  How different could it be?

I can hear you laughing from here.

Rudy Ray Moore might have some sloppy Kung Fu, and his acting isn't even close to top notch, but he can entertain.  The first time I saw it, I didn't know what the hell I was even looking at, but I knew I liked it.  Having not watched it in twenty years, I can still say it's a fun way to pass two hours.

Dolemite is in jail for crimes he didn't commit, having been framed by the cops.  With the help of the warden and Queen B, he is released in order to stop a drug deal or something.  He also tries to prove his innocence, gets in a lot of fights, swears rather inventively at people, has some sex, and rhymes much of his dialogue.  John Shaft never did that.

"Man, move over and let me pass 'fore they have be to pullin' these Hush Puppies out your motherfuckin' ass!"

If you want a film with deep characterization, passable fight choreography, and an intricate plot...look somewhere else.  Those just wanting to have a good time, you will find it here.

AND THERE ARE SEQUELS! More on that tomorrow.