Be my Valentine Pam Grier 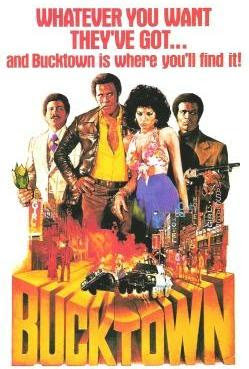 "Do you believe in God?"
"Sure.  Why not?"
"Then you're in the wrong place."
Duke Johnson is in town to bury his brother.  At the funeral he meets Aretha (Pam Grier).  Although he's new in town, she doesn't think to highly of him.  She was a friend of his brother, and is convinced Duke's going to skip town after the funeral.  Those were his exact plans, only he's got to stay in town for two months in order to inherit his brothers bar, Club Alabam.
Of course, there are stipulations.  In order to get that bar back open, he's got to pay the local police for a "city license" which is an extra $450.  They have their fingers in everybody's pie, and besides the one time fee, there will also be an extra $100 every Saturday or they'll close him down.  And if they close him down, he'll never be able to sell the bar and leave.  Duke had no problem paying for the license, but he'll be damned if he's going to be shaken down every week.  His answer to the protection money, one hell of a bar brawl.
So, the bar brawl wins Aretha over.  She pays a visit to Duke, beers in hand.  It's a typical evening.  Beer, anger, slaps, sex.  It's not a Pam Grier movie unless she gets naked once.  And immediately after the sex, the cops show up to shoot the house all to hell.
And that's not all.  It seems his brother, who did officially die of pneumonia, was actually beaten severely and left for dead.  Do you think Fred Williamson is going to stand for that?
Hell no.  He could run.  It's what Aretha wants him to do.  Instead, he gets on the phone and calls his friend Roy.  Roy comes to town with backup, including one Carl Weathers.  Do you really need more backup than Carl Weathers? In a suprising turn, they kill or capture every single crooked cop in a matter of minutes.  The movie isn't even halfway over, and already they've taken down "The Man."
Their reward from the mayor.  They get to be the law in Bucktown. I'd see this as a good thing, but not Pam Grier.  She's convinced Roy and his boys will be worse than the cracker lawmen ever were.
Despite her rather unimpressive acting in this film, she was right. Roy and his crew shake everyone down even harder than before, drunk with all the new found power and money.  For the most part, they leave Duke alone, but it's only a matter of town before before hell comes to Bucktown.
Bucktown is a film with many merits, especially the midplot twist of the "heroes" being just as corrupt, but it's also got some faults.  Mostly, it's the acting of Pam Grier.  Today should be a love letter to the first lady of blaxsploitation, but I figured it's best to start a week retrospective with her absolute worst performance that I've ever seen.  She's wooden and unbelievable, and I have no idea why.  Did she not like the director?  Did Fred Williamson piss her off?  Who the hell knows, but thankfully, it's a performance she doesn't repeat.
There are better performances to come.
Posted by Dan Fleming at 12:01 PM