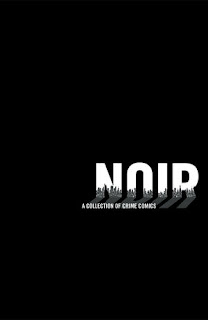 My book room looks like a yard sale unfortunately.  Often, books I'm dying to read get stacked up on the floor (that's what happens when you need more bookshelves than you have walls) and forgotten for a spell.
It's a shame because books will sit there for months, their existance a distant memory until a synapse fires in my brain, reminding me that NOIR was in the fourth pile on the left.

I went and found it yesterday.

NOIR, published by Dark Horse books, is something the comic industry needs more of, crime anthologies with stories by some top tier creators.  The plans were to read one story and review it today, but it was so enjoyable I just couldn't stop turning the pages.  Before I knew it, I had put the book down, each and every segment read and enjoyed.

Therefore, I'm going to combine today's entry with tomorrows and review the entire book, story by story.  I'll do my best to avoid the dreaded spoilers, as most of the stories have a twist-type ending.

I haven't read much of Stray Bullets, so I'm wondering if these characters appear anywhere in those stories.  The story did it's job if it's intent was to promote SB, because I'm interested in reading more about them.  And it worked as a short as well.  The characters were quickly defined, the story engaging, and the ending, which I won't reveal, was spot on.  I've always enjoyed Lapham's art, and these ten pages were no exception.  Great way to kick off the book.   Rating A


The Old Silo
written and illustrated by Jeff Lemire 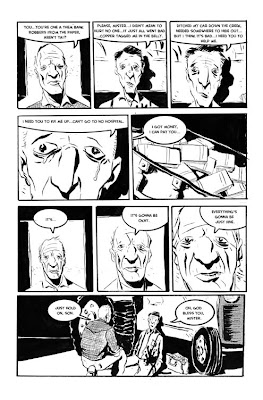 I've just recently gotten acquainted with Lemire's work, and it strikes a chord with me.  His tales of Small Town desperation are all too familiar to someone having grown up in much the same manner.
Henry's having a tough go with life right now.  He's behind on his farm payments, and his wife has been sick.  The bills are piling up and the money isn't coming in.  But one morning he goes out to his barn and finds a man, a bank robber, who has been shot.  He's offering money in exchange for help.  Could this be the break Henry's been looking for.

As always, Lemire's artwork fits the story. Rating A

Mister X: Yacht on the Styx
written and illustrated by Dean Motter 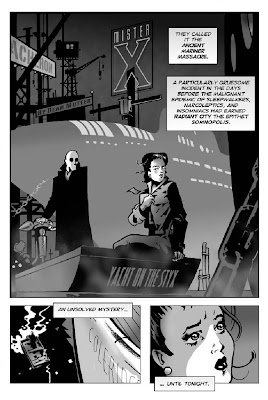 An interesting little tale, told with lots of style.  Mister X and Rosie are investigating the death of a shipping magnate named Virgil Charon. (Gotta love that)  Only problem is, if his body has been dead for twenty five years, who has been alive since?  One word, Dopplegandroid. Don't worry, I'm not giving it away.

A very clever story, with some cool steampunk/futurist vibes to it.  Motters greytoned art is well suited for the story.  I've got to read more Mister X. Rating B

The Last Hit
written by Chris Offutt, illustrated by Kano and Stefano Gaudiano

This story instantly caught my eye because of the illustrators, who were behind  so much wonderful artwork in the DC Comics series Gotham Central.  Their gritty work was perfect for this collection.  But I'll tell you something, this Offutt guy, I'd never heard of him, but he crafted a nice little cat and mouse story.

The main character, he's an assassin for Mr. Machine, and this is his last job.  But something about it just isn't right.  Could it be he's the one being hunted?  He's got to rely on his instincts and rules if he's going to survive this mission. Rating B 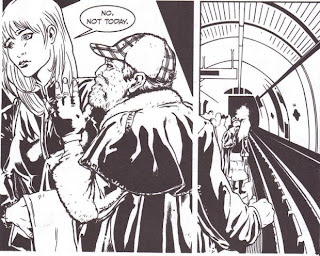 The first story in the collection to leave me a little cold.  It's got a good premise.  Perhaps today is the day to finally push that bothersome bum into the path of the oncoming train.  And the story is told well, through a series of really tiny, mostly silent, panels.  And the art is good as well.    My one complaint would be the two page spread, which I didn't read as a two page spread, which did bring about some confustion.  On the second reading I tried it the other way and it made more sense.

So I'm not really sure why I didn't like this story as much as some of the others.  Just a gut feeling.  Grade C

The Albanian
by M. K. Perker

What would you do if you were the night cleaning man and happened to find a whole lot of dead bodies on your regular rounds?  Very fun story that amused me to no ends.  And the puppet!  Oh man the puppet.  That is all.  Grade A
Posted by Dan Fleming at 11:27 AM