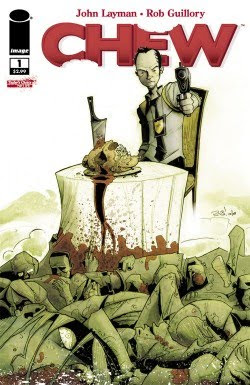 Hype can be a terrible thing.  It can inflate expectations to the point where anything short of spontaneous orgasm will be considered a disappointment.

Case in point, Star Wars.  In all fairness, The Phantom Menace could have been the equal to Empire and nerds such as myself would still be burning Jar Jar Binks standees in effigy.  Did it help that the movie was underwhelming?  No, but we had years of build up to write the movie in our own minds.  No matter what, it wasn't going to be good enough.

But hype can also have it's merits.  Without it, would books such as Blankets, Mouse Guard, or Fun Home have found the audience they deserved?  Those books gained a small but vocal audience and then exploded. I remember desperately wanting to get my hands on a copy of Blankets despite never hearing of Craig Thompson or knowing what the book was about.  All I knew was everyone at the San Diego Con were losing their shit over it.

Today's example of hype is Chew, by John Layman and Rob Guillory.

When this book first stormed the shelves, people were wetting the bed over it's awesomeness.  Message boards were filled with joyous exclamations and parents were re-naming their newborn children.  The first printing sold out.  So did the second.  At that point I stopped paying attention to the press releases and just assumed the book would reach Harry Potter-like print runs before the third issue.

I needed to have this book in my hands.

Only problem was my local comic shop is not exactly "Indy" friendly.  And yes, to him, Image comics is considered an Indy.  I'd bet my copy of Lovely Biscuits that if he ordered even two copies for his store,  those would have been preorders.  Even then, big if.

With all the attention the book had garnered, I figured someone besides myself must have inquired about the book, but my questions were just met with a blank stare.  He'd try to get some in.  That meant he'd forget the request the second my money went back into my pocket.  I knew it was a hopeless task.

(The situation was so dire, I even looked on ebay for the issue.  I've never paid $50 for a recent issue, but the hype machine was now controlling me.  Somehow, I regained my senses, and fiscal responsibility, and avoided hitting the Buy It Now button.)

Thankfully, the fine folks at Image came to the rescue.  Within seconds of shipping Issue 5 to the store, they followed it up with Chew Volume One: Taster's Choice.  Five issues, one basement low price of $9.99,  and my preferred format.    The book was mine all mine.

Then something strange happened, I didn't read it.  It sat there on my shelf, dying to be read, but with me keeping a cautious distance.  Hype had burned me in the past, and the possibility of being disappointed beyond comprehension was paralyzing my reading hand.  (Think about it, you do have to hold the book.)

So I went back to the internet, which is usually a bad idea.  The strange thing was, people were still telling me good things about the book.  By now the backlash machine should have been in full effect.  Where were the cries of "sellout!?"  After reading a few reviews I half expected the book to open up like the Arc of the Covenant, peel my skull back, fill it with candy and boobs, then leave me to a life of complete fulfillment.

I gave it a shot.

And it was excellent.

Tony Chu is a cop with a secret. A weird secret. Tony Chu is Cibopathic, which means he gets psychic impressions from whatever he eats. It also means he's a hell of a detective, as long as he doesn't mind nibbling on the corpse of a murder victim to figure out whodunit, and why. It`s a dirty job, and Tony has to eat terrible things in the name of justice. And if that wasn`t bad enough, the government has figured out Tony Chu`s secret. They have plans for him… whether he likes it or not.
(from Chew: The Official Website)

Seriously, is that not the greatest of hooks?

But the book goes beyond the premise and gives us interesting characters, even better situations, and perhaps the strangest love inducing vomit of all time. It's quirky and idiosyncratic and about 1000 more words that mean the same thing.  I'd be doing a disservice by telling you more, as spoilers are indeed the work of the Devil.

And the art! Oh my, it's amazing.  I'd never heard of Rob Guillory before, but by gum if he isn't THE artist for this story.  It's over-the-top quality is a perfect compliment to the story shenanigans.  (Seriously, if this book had been drawn by a photo realist like Greg Land, we'd all be reaching for guns and buckets by now.)

Consider me another cog in the hype machine.


(Orgasmapathic- The ability to make fanboys cream themselves over a book. See also "Geoff Johns")
Posted by Dan Fleming at 10:18 AM