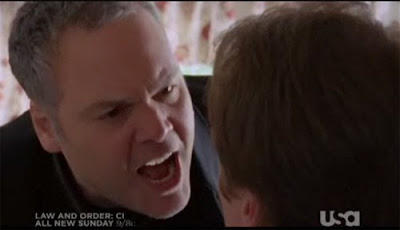 How's this for a confession from a television junkie...I don't have cable.  My apartment has tin ceilings, so even before the digital switchover, I didn't even get the free channels. Sure, I could squint real hard, and make out speaking shapes through all the snow, but it wasn't really condusive to quality viewing.   Up until I got my current job, where sadly enough, a great part of my day can involve watching television, I just didn't watch programming on a regular basis.

I didn't miss it all that much.  Sure, I had to be careful reading Entertainment Weekly for those oh so terrible "spoilers," but other than the occasional plot point revelation, it was satisfying to not be in front of the tube at a certain day and time.  It's easy to not be a slave to the box and the corporate honchos who decide that Jay Leno is better than Conan O'Brien.  I have the internet, which should be quite obvious since I am not posting this on a bulletin board in some hallway.  If I want to watch a show, I can check the network's website, wait for the DVD's (which is my preferred option) or heaven forbid, download a torrent.

So you'll forgive the ignorance of the following statement/question.

When the hell did the USA network become so good?

Seriously, this is the same network, that as a child, I watched nothing but wrestling and Kung Fu theater?

Like I said, at work, the television is often on.  Far too hours it's tuned in to VH1 or E!, which means it's easy to ignore.  I couldn't give one giant ass about any of the Kardashian clan, those very classy young men and women from New Jersey, or the umpteenth dating show where one person with herpes gets to date 20 people with the Clap.

But this weekend, the channel stayed on the USA network.  And while I was reading, I couldn't help but notice the variety of criminally based shows it offers.

Sure, I'd heard of Monk.  Tony Shalhoub wins an Emmy every damn year.  And I knew about Law & Order, but it seems of late that USA has really developed some top notch shows.  (It could be that I am falling victim to the constant blurbs that each commercial  bombarded me with, but what can I say, advertising works.)  And it seems I've got some DVD's to add to netflix.

1. Burn Notice.  I remember the lead guy from Eastwood's Changeling, and the girl looks vaguely familiar, like she might have once fought He-Man, but the real draw for this show is Bruce Campbell and his Amazing Chin.  Spies are always fun, and a spy helping others is intriguing.

2. Psych. A fake psychic?  Aren't they all?  I kid, but I love the concept of this show.  Most psychic con artists are just very observant.  This show makes use of that talent.  And it has Dule Hill, from The West Wing.

3. In Plain Sight.  I've been a sucker for the witness protection every since I saw Steve Martin's My Blue Heaven.  Other than that, I really know nothing else about the show.

4. And the newest addition to their lineup, White Collar.  Not exactly the most original idea, a con man helping the government, but this show wins the prize for finding something interesting to do with a Saved by the Bell cast member.  Sorry Mario, but hosting Miss America does not count.

*The preceding message was not brought to you by the USA network, no matter how many times I mentioned them by name.  Seriously, I am not on their payroll, though monetary offers would be accepted, and are actually encouraged.  I can be bought off.  Cheaply.  Throw in DVD boxed sets, and I'd settle for less than three figures.
Posted by Dan Fleming at 10:57 AM