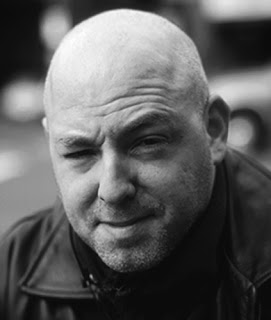 It's hard to believe there was once a day where I, as well as 99% of comic readers, had never heard of you.  But it's true.  I was first introduced to your work by my friend the Fashionista, who at the time worked at a comic shop.  He handed me a copy of Powers #1 and insisted I buy it.  He assured me I would fall in love almost instantly, and indeed, he was right.

I had just gotten back into reading comics after many years away.  (This was circa '99)  Kevin Smith's Daredevil had brought me back to shops, and I was looking for new titles to add to the pile.  At first it was hard.  Sure, I had Batman, but books such as Fantastic Four, X-Men, and Superman had left me cold.  They were not the books I had remembered fondly as a child. At my friend's urging, I turned to the so-called "indy" titles, which were sparsely scattered on the shelf.  Powers was like a beacon.

Soon I saw your unusual name more freqently.  Was that you on Sam & Twitch?  Why yes it was!  I could hardly believe I'd actually be reading a Spawn book or actually enjoying it.  I stayed with you on that book, and even hung in for your brief run on HellSpawn.

Then I heard of your crime books.  Could it be that all these books existed without me even hearing the faintest whisper?  I scoured the 50% off trade bins at shows and soon had copies of Torso, Jinx, Goldfish, and Fire.  Not only could you write up a storm, but you had some art chops in you as well.

You were soon given the keys to the Spidey mobile, and I couldn't have been happier for you.  This would be the book that would bring you fame and fortune, and you had earned every bit of it.  Not only were you remaking the Web-Head for a new generation, but you were also continuing on with Daredevil, the book that brought me back.  Circle of life and all that happy stuff.

You, along with Alex Maleev, made Daredevil THE BOOK to read for me.  Every month was fantastic, and before I could shout to the rooftops with nerd glee, you brought back Power Man and Iron Fist, my two favorite Marvel characters.  You made them relevant again, and soon they were Avengers.

This is where my story begins to get a little misty eyed.  You were put in charge of the Avengers.  At first it was I bumpy ride, and I've got to hand it to you, you handled it well.  The internet was not kind to you.  Even I had to wonder if this was going to be your big misstep.  But you charged on, weaving your tale, and slowly taking over the Marvel Universe like a one man Hydra.  Soon, it was seemingly all under your control.

And now, you are bringing about "The Heroic Age."  This is where you wanted it to go all along.  I should be happy for you.  But part of me misses the you that made creator owned crime comics.  Sure, I've still got Powers, and for that I'm thankful.  Would it be greedy to ask for more?

I don't think I'm alone in this.  And so I plead to you, Brian Michael Bendis, please go back to writing more crime.  You don't give up your day job.  The MU hasn't been this interesting in years, and I'm sure the paychecks are damn sweet.  But, if you can, find the time for another creator owned book.  Or revisit an old one.  Who among us wouldn't love to see Maleev get another crack at Jinx?

Give it a thought.

Sincerely,
Dan
Posted by Dan Fleming at 10:31 AM