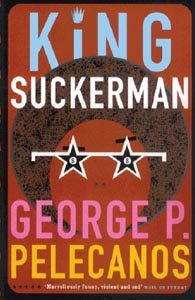 Show me someone who says he’s satisfied, and I’ll show you someone who is full of shit. We always want more, it’s in our DNA. We want the most money, the most toys, the most anything. I'm just as guilty as the next man. Do I think I’ll reread all the books on my shelf? Hell no. But I like owning them, looking at them, and yes, showing them off. You know what they say about the size of a man’s library don’t you?
We don’t necessarily limit our greed to the things we own. Me, I always want to be smarter. It’s why I read so damn much. I like it when I have the answers. At times, I’m sure I think I’m smarter than I actually am, and I know that can get on people’s last nerves. It won’t stop me though, despite the realities that someone will always be smarter than me.

King Suckerman, by George Pelecanos, is all about people wanting to be more than they are, and desperately trying to convince others of the same lie. There isn’t a single character in the book who isn’t showing off just a bit, and as an audience we are invited in on the game.

The first hint should come from the title of the book. King Suckerman is actually a movie that everyone wants to see. It’s the 70's, and KS is the new Shaft, or more acurately, the new Mack. From what little we are told, he’s a badass pimp who is gonna take it to the man. Lines form around the block, and I’m not exaggerating when I say everybody in the book wants to see it, all expecting the greatest movie.

But the truth is a funny thing. King Suckerman doesn’t show the life of a pimp as a glamorous profession. I won’t ruin the ending of the movie, but let’s just say it’s not a happy ending. And it certainly wasn’t the ending everyone expected.

The movie nicely parallels every characters arc as well, most notably Bobby Ray Clagget, the young white boy who fancies himself a hard boiled killer straight out of the midnight picture shows. It’s his murder of his projectionist boss (at a drive in no less) that kickstarts the plot, and it’s the first murder of many.

"Damn, he hadn’t even heard the pump. That wasn’t at all like the script he had written up in his head. Clagget went ahead with the dialogue anyway. There wasn’t much else he could do."

Right from the beginning, we as readers are clued in to what’s going to happen. And it’s a great ride, full of more music references than High Fidelity, and characters straight out of Hell up in Harlem. It’s authentic and a ton of fun.
Posted by Dan Fleming at 9:29 AM