Two to the Chest, One to the Head.

Fade to Blonde by Max Phillips 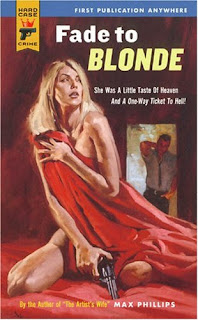 “No, it’s true. I liked sin. I was praying for a girl who’d, you know, pull the book out of my hands and glasses off my face, even though I didn’t wear glasses, and you know, corrupt me. I thought I was a very serious guy, too, but I was hoping some red-hot mama would come along and make a wolf out of me.”

A failed screenwriter, down to his last few pennies takes the time to listen to a sob story. This girl is pretty, not your typical starlet beautiful, but there is something to her that he can’t resist. She plays it off, not wanting to use her body to get what she wants. She’s done that before, and that’s why she’s in trouble.

She needs a man murdered.

So Ray, the main character, agrees to help. He goes “undercover” and discovers he’s actually a pretty good gangster. He does his own investigation, finds out a few things he shouldn’t, and isn’t quite sure how to get out of it. Bullets might work.

The story is descent, the prose, adequate, but not very quotable. There are some great scenes, especially the slash and burn of the whorehouse. The ending works, although it’s nothing new. I was surprised the writer did not play up the screenwriter aspect, as I was sure it would play into plot.

Good, solid read. I give it One to the Body.


Top of the Heap by Erle Stanley Gardner 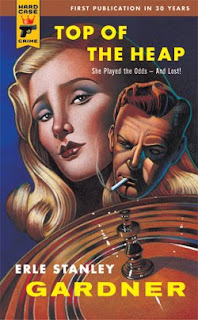 Bill put down the magazine. “Now listen, Lam,” he said, “you’re a nice egg, but you’ve got yourself poured into the wrong pan. You’ve led with your chin and you should be smart enough to know that you’re going to make trouble.”

P.I. Donald Lam has given his client, a young man of wealth and privilege, the perfect alibi. Only problem is he doesn’t believe it. He’s got a sneaking suspicion he’s been played for a fool, and if it costs him is job, so be it.

He’s going to climb into a tangled web of lies, scams, and murder, and hope he doesn’t get bitten. And quite possibly, he’s going to get rich along the way.

Lam’s a good character, with brains and brawn to help him along his way. He’s not afraid to blackmail widows, the police, even his own partner, if it’s going to help him. But he’s got honor, and odds are he’ll share the wealth if necessary.

The plot had some twists and turns, and lots of names to follow. It took some close reading to follow along in parts, and actually taught me a few things about shell corporations. Not something I expected.

Another good, solid read. Once again, I give it One to the Body. 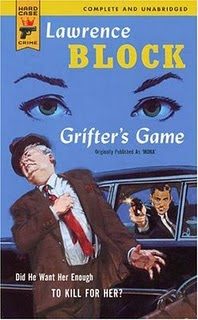 A grifter grabs a strangers suitcase as he arrives in town. He plans on wearing some clothes, maybe selling what he can from his contents. There is more in the case than he bargains for. He discovers who it belongs to, and who she belongs to.

He’ll kill for her, and take her away from the life of desperation she live.

It goes right, and wrong all at once.

Perhaps he’s the one who has been played.

This book was the perfect book to start off the Hard Case line. Written by a Grand Master of Mystery, it rolls along like a freight train, barreling over everything in its way.

Block’s prose is fantastic, natural, yet snapping lines off like hardened criminals. The main character is a natural, believing he’s in control of every situation, yet his obsession consumes him, leading him to make dumb decisions.

And the ending! Perhaps the bleakest conclusion I’ve read since Scott Smith’s A Simple Plan. Just an amazing book. Perfect.

I give it One to the Head.