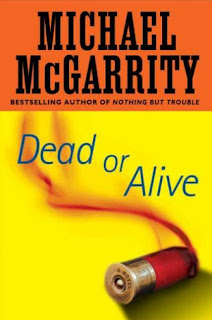 Dead or Alive
by Michael McGarrity

I'm not much for the wild wild west.  When I was a kid, my father would watch shows like Bonanza, and The Rifleman, and since they were in black and white, I naturally hated them.  Like any rational child, I decided that I would hate all westerns in any medium.  Even my illustrated classics version of Last of the Mohicans went unread because it sounded too much like a western.

It wasn't until high school, when I was forced to read Shane that my mind slowly accepted the possibility that some entries in the genre might have merit.  A while later Unforgiven came out, and I was forced to eat my words.

Since then I've watched a few westerns, mostly with Eastwood, and have formed a distant respect for them.  Still not really my cup of tea, but they can be good.

I'm not really sure why I decided to pick up Dead or Alive.  The title alone sounds like those old television shows that I avoided like the plague.  And from the book description, it's quite obvious it's set in the west, though not the dreaded Old West.  I can definitely say it wasn't because of the cover, which is so...boring, that I'm surprised anyone picked it up.

The book claims its a Kevin Kerney novel, but he's only 1/3 of the main characters in the book.  McGarrity returns home to Santa Fe when his business partner and friend is shot and killed by an escaped convict.  He joins in the manhunt with his son, and vows to stop at nothing to bring the criminal to justice.  Jail might not be the justice he's looking for.  He's a great character, and I'd love to read more books in the series, but in this book, he's not why I kept reading.  In all honesty, I like the other two characters much more.

One is his son, half-Apache Lieutenant Clayton Istee.  He brings his heritage to the role, and his treatment of the dead and the land make for an interesting character.  At the very least, it sets him apart from all other lawmen.  He has a spirituality about him, and it rounds him out quite well.  It's also interesting to see the relationship between himself and his father, a man he barely knew a few years ago, as they interact with one another.

The other interesting character is the books antagonist, Craig Larson.  To call him an amoral psychopath would be an understatement.  He's a man who can justify each crime he commits, no matter how needless or horrible.  McGarrity does us a great service by telling the story from his point of view whenever possible as he makes his run from the law.   It's a believable sneak peak into the head of man we wouldn't want to know.

The authors bio states that McGarrity is himself a former deputy sheriff and investigator.  I have no problem believing this, as each page drips with procedural authenticity.

So despite the bland cover and generic title, I highly recommend this book.
Posted by Dan Fleming at 5:43 PM