Friday Night at the Movies Week 8 - Edge of Darkness 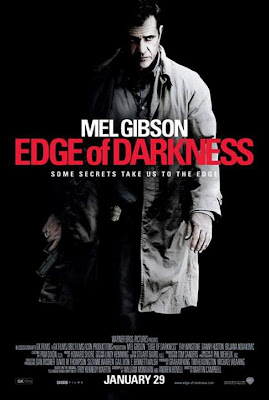 Do we have that out of our systems, because for the most part, that's all I'm going to say about the comparison.  It is a creature all it's own, and I'd rather not do a frame by frame comparison Mr. Van Sant.

I'll watch Mel Gibson in anything.  I've always enjoyed his work, from Mad Max to Martin Riggs to William Wallace.  The guy knows how to portray a compelling character.  Put him in some sort of stressful situation and watch his eyes and Adam's apple do all the work.  Yeah, he's so good that his throat can act.  Take that Meryl Streep.

But is the movie any good?

It's got it's weak points for sure.  Mel can't do a Boston accent.  I understand, it's tough to pull off.  Matt Damon and Ben Affleck had trouble with it in Good Will Hunting and they are from Boston.  Luckily, to steal a line from my friend the Paparazzi, Mel attends the Kevin Costner School of Accents.  If it bothers you, wait a minute.  Odds are the accent will disappear.  And it does.  Unfortunately, he's not the only actor struggling with it.  There are at least three other characters that I want to slap each time they open their mouths.

One of them is not Ray Winstone.  I would not dare raise a hand to him.  Not because he speaks with his regular accent, but because he would mess me up.  I'll admit it, I'm afraid of him.  He uses the frightening quaility he possesses beautifully in this film.  He's a guy who solves problems, wink wink, nudge nudge.  Each moment he is on screen, the film is elevated beyond it's level.  He's that good.

His character, Captain Jedburgh, is the conscience of the film.  It's his job to right the wrongs that need to be, regardless of his bosses wishes.  Everyone has a secret in this movie, and his is what compells him.  I wasn't suprised of his actions, and if you pay attention, neither will you.  The twists aren't exactly telegraphed, but they are easy enough to spot ahead of time.

So what's my verdict?  The film is solid, but nothing spectacular, with the exception of the aforementioned Ray Winstone.  Remove him or replace him and this film suffers beyond Mel's repair.  It's worth a viewing, but it won't go down as classic Mel.