Last weeks viewing of Underbelly got me thinking.  More specifically, it was Vince Colosimo's portrayal of Alphonse Gangitano that turned the wheels.  He was a scary, brutal sociopath, and if I ever found myself in a room with him, I'd bolt for the nearest exit so fast he'd be looking at my speed outlines.  So of course, I was facinated with him.

What is it about the so-called villains that engage us?  Within seconds I knew he was the character I wanted to watch.  And that's how it usually goes for me.  Any show with good guys and bad guys and I'm going to watch for the criminal.

What does that say about me?

Is it a coincidence that my favorite characters are often the most reprehensible?

So today, I bring you three of my favorite characters.  They are... 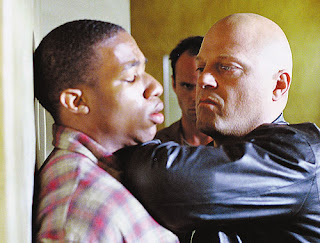 Put yourself in this situation.  You're a good cop.  Every T has been crossed, every I adorned with the necessary dot.  Following the book has been the way you've always played it.  But now you've got a guy in the box.  To call him human would be debatable.  He might not be guilty of the crime you want him to be guilty of, but this man hasn't been innocent in years, if ever.  There is information you need, and a little girls life might depend on it.  To give you what you need, he'd have to admit he's a degenerate scumbag, and that's not going to happen today.  He's well aware of his rights, and a lawyer is but a few moments away.

What do you do?

You are not the type of cop that's going to cross that line.  The man watching behind the mirrored glass, he is.  And he's been itching to introduce himself to the man you've got cuffed to the desk.  He walks in, phonebook in hand.  You excuse yourself, knowing what is about to happen, but not wanting to see it with your own eyes.  This cop, he gives you nightmares.

That cop is Vic Mackey.  He's crossed that line so many times you wonder if he's able to find his way back.  But you smile, laugh at his jokes.  When you're on his side, you can't help but like the guy.  He's funny, charming, and for the most part, damn fine police.

But those pieces of evidence that get tampered with, those perps that disappear, he might as well leave his calling card with them.  He's dirty.  And God help you if you ever end up in his crosshairs. 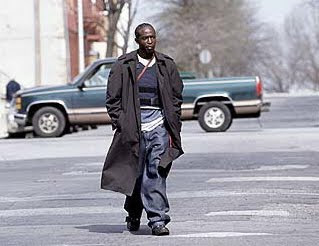 This is your fucking corner.  You sling out here all day, giving the customers what they want.  You get some money in your pocket and some rep attatched to your name.  Some punk comes up on you, he's going to get one in his head.

You've been doing this since you were eight years old.  Started out as lookout, moved up to runner, and here you are, sixteen and large and in charge.  Nobody is moving you from this corner.  Nothing scares you.

Nothing except Omar, the boogyman of Baltimore.  You've never even seen him.  You've heard the talk, the stories that seem damn near impossible.  Nobody walks down the middle of the street in broad daylight, shotgun in hand.  At least nobody with any fear in his heart.  He'll pull that piece on anybody in the game, whistling while he works. 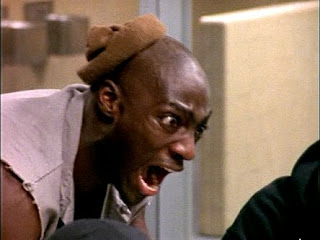 You watch him as the fish come in.  He's got his headphones on, swaying to some unheard rhythm.  He appears to be nodding off. As much tits as he snorts, he could be.  But you know him better than that.  The man is a shark. He already smells blood in the water.

Five dollars says that new white boy, the pretty one who lost the lottery and drew bunk with Adebisi, ain't lasting the night in there with him.  And if he does, he's not coming out the same man that went in.  See, Simon might not fuck him tonight, but he will soon enough.  He'll be clear with those intentions.  Before long that boy will be putting an entire box of powder up his nose to forget what he had to feel the night before.  And guess who'll be supplying him?

I'd warn him off if I could.  Tell him to bunk with anybody, even those Nazi fucks I can't abide.  But I don't cross Adebisi.  I've seen what he can do, and that's not going to be me.