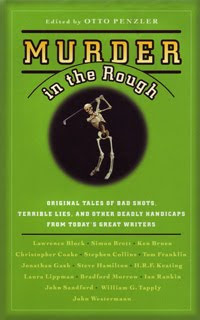 Golf was invented to frustrate me.  I'd find myself on the fairway or the green, sweat beading on my brow, anger rising, as I'd alternate between amazing shots and shanks into the woods.  More woods than fairway.  Oddly enough, I never found myself buried in the sandtrap.

Which is more than I can say for Stevie.  For him it's not a hazard, it's a final resting place.  But before his untimely demise, he dated Lucy's mother.

Lucy is a grammar obsessed golf instructor in what I assume is a small Minnesota town.  She has some skill with the club, enough to shoot a 68, and she also has a list.  It's very important to her to stick to that list.

And speaking of lists, it seems the suspect list is long.  Good ol' Stevie just couldn't keep his putter in his pants.  His latest conquest was Mary, otherwise known as "Satin Shorts."  That might not have sat well with another companion of hers, Willis Franklin, or as Lucy knows him, the man who killed her Daddy and got away with it.

If only golf was really this interesting.
Posted by Dan Fleming at 11:02 AM