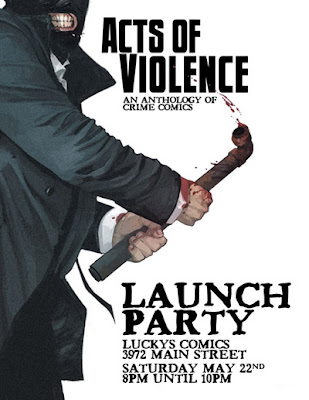 Remember a few weeks ago, when I noted what a great name Random Acts of Violence would have been for an anthology?  Well, I wasn't far off.  Acts of Violence in "an anthology of crime comics" published by, hold on here, Caper Away Productions, Caruso Comics, Critical Hit Comics and New Reliable Press.  I managed to get my hands on a copy a month or so ago, hey, writing this blog has some advantages, and as I type this out, it should be available at conventions and other distribution means.

Now on with the review.

The art was capable, but nothing to make you stop and admire it. The best feature of this story was the dialogue, particularly the excellent use of period language.  Terms such as bulls, wolf whistles and bubs are sprinkled throughout.  And while the story was good, it's execution was rushed.  Characters and situations were introduced and quickly discarded or glossed over.  It felt like watching Once Upon a Time in America in fast forward.  It removed any chance for that emotional guy punch the ending could have delievered if I'd had more time to get to know the characters.  It's not often I say this, but the story would have been better suited as an OGN.

A  little revenge tale that tugs at my small town, we take care of our own, heart.  A solid script that knows when not to talk too much.  It allows the art to tell most of the story.  I've seen Mann's art before, and I hate to say it, but I prefer it in color.  The first page especially was very thin, and certainly would have benefitted from color.  However, each following page uses more grey tones and ink, and it improves them considerably.

Once you get past the terrible name, it's a very good story, that shows how far junkies are willing to go when in need of their next fix.  The protagonist, Reggie, is a terrible human being, and as much as he tries, he just cannot better his situation.  It's nice to see that his choices, not fate, keep him circling the drain.  The art is a great compliment to the story, using thick, heavy lines and lots of black to almost make the page feel dirty.

The Orchard
written by Ed Brisson
art by Damian Couceiro

A very quick story about a cop and his partner who takes vengence a little too far, and what he will do to help cover it up.  Add in a little twist about why he's so willing to help his buddy, and the best art in the anthology, and you've got a solid final act to the book.  My only complaint is that it ended too quickly.  I would have enjoyed seeing where the story went past it's conclusion.

Overall
A good mix of stories and art styles, each one offering something different.  A solid anthology that will hopefully spawn a sequel.  A great price point ($9.95) which merits taking a risk on something new and unknown.
Posted by Dan Fleming at 11:03 AM