Wasn't planning on discussing this today, but with the trailer hitting the internet yesterday, I found that I just couldn't help myself.

First of all, I have little or no previous knowledge of the Green Hornet.  I'm aware that Bruce Lee originally played the part of Kato, and that the Green Hornet himself is a Batman/Bruce Wayne type of character.  It always struck me as a cool premise, but I never got into it.  Is the show even available on DVD?

Then came word that Seth Rogan, a comedian I've always liked since Freaks & Geeks, was going to take over the role as star and writer with visual genius Michel Gondry directing.  Since I never really got that excited about the failed Kevin Smith project, I decided to hold off hope of this even materializing until I saw the first trailer.


And you know what, I'm excited.  This looks fun. 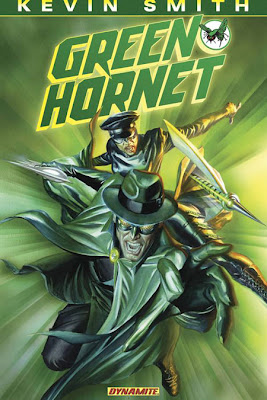 But for those of you saddened by the loss of the Kevin Smith vision, have no fear.  Dynamite Entertainment has released a comic version of his film script, and it can be found alongside seven or so other Green Hornet projects.  I read the first issue, and didn't really find myself enjoying it that much.  But Kevin Smith has written far too many stories I do enjoy, so I'm going to give him the benefit of the doubt and ordering  Kevin Smith's Green Hornet vol 1 : Sins of the Father Hardcover.  It's $24.99, but available from Discount Comic Book Service at 50% off.  I'm also planning of purchasing the Matt Wagner-written Green Hornet Year One when that is collected.

And as a bonus goodie, check out the Brian Michael Bendis interview of David Mamet, as they mostly talk about Mamet's new graphic novel, The Trials of Roderick Spode, "The Human Ant."  Yes, you read that correctly, Mamet has done a graphic novel.  So happy.
Posted by Dan Fleming at 11:16 AM