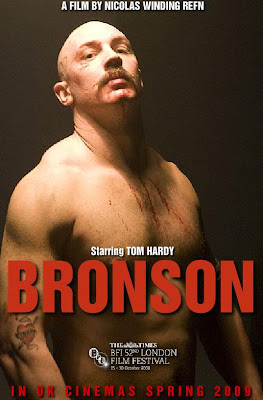 For those of you in your mid-thirties, like myself, you might remember watching Rocky III for the first time.  I know, it's an odd film to bring up on a crime blog, but stay with me.  Remember Mr. T's Clubber Lang in that film?  Did he scare the hell out of you as well?  At the time I saw the movie I was only eight years old or so, possibly a bit younger, so I hadn't exactly developed a sense of bravery yet.  To me, Luke Skywalker taking on Darth Vader was brave, but I also knew it to be a complete fantasy.  There were no Sith Lords in real life.  Mr. T was real, and the thought of him delivering another beating to Rocky Balboa made my pulse race.  One look at that mohawk and gold chains, and I knew he was capable of killing him.

Watching the film Bronson, I got that same feeling again.

From his opening monologue, with his shaved head, thousand yard stare, There Will Be Blood mustache and hell-raising smirk, to him prowling a cage with fists flying and cock swinging,  I knew I was in for something dangerous. Watching him take on numerous armed and armored Hacks, naked and covered in filth, was like watching a lion.  Fuck Daredevil, this is the man without fear.

I've heard comparisons to Clockwork Orange in other reviews of this film, and while I can definitely see the parallels with the violence and narration, it stops there.  There is no story of possible redemption with Bronson.  He lives for the violence.  And thats all.

The film isn't much for the story, as it's mostly scenes in his life.  And while they are presented in a narrative order, there isn't an endgame in mind.  There will be no life affirming choices, no forks in the road, just more violence.  I'm okay with that.   Charlie is telling his side of the story, and his side alone.  Because of that, there will be some unreliable narration.  He doesn't exactly paint a pretty picture of himself, but he must certainly omit some things.  But Charlie is a natural showman, which is presently nicely with some asides on a stage, him covering his menacing dome with equally frightening face paint.  He makes it clear from the beginning that he wants to be a star, wants to be famous.  Without much else to offer, he decides to become famous by being the most dangerous prisoner in the British prison system.

It's easy to see how he earned that reputation.  From stops in an underground piss soaked fight club, to a stay in a mental hospital (complete with dance parties) he is always reading and willing for a brawl.  Numbers don't matter.  He'll fight one guy, two guys, even dogs if necessary.  In prison, the guards live in fear of him, knowing he could snap at any moment and broken noses will follow.  Hell, even they know they are just bit, nameless players in his story.

And without the amazing acting of Tom Hardy it wouldn't be a story worth watching.   He is flat out brilliant.  I would never have believed that this frighteningly believable beast of a man is the same ponce from Star Trek: Nemesis.  This film is his version of DeNiro's Raging Bull.  He didn't act the part, he became the part.  Watch the DVD's special features and see the five week training period he had to endure to physically change in Bronon.  Or better yet, listen to the included Bronson monologues to see how well he mimicked the speech of Bronson.

In conclusion, as a film, it doesn't necessarily work.  Without the main performance, there wouldn't be any reason to watch.  But the director, Nicolas Winding Refn was smart enough to focus on Hardy and forget the rest.  Easily one of the best performances last year, and it goes to show just how foolish the Academy Awards were not to include him as a nominee.