The Long Con Week 24 - Dirty Harry: Death on the Docks 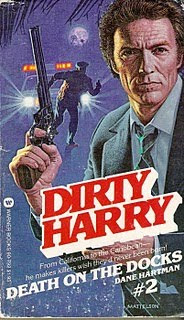 Usually if someone comments that "this book would make a great movie," it's meant as a compliment.  The reader was so enthralled with the characters and plot so much that he/she just can't wait to see it presented in an other medium.  I've been guilty of the same thoughts.  As soon as I put down The Girl With the Dragon Tattoo, I was "Google-ing" the movie, marking down the days until it's debut in the states.

The same can not be said with Dirty Harry: Death on the Docks.  Not that I was expecting much.  Until recently I wasn't even aware the book series existed.  And while the movies were popular, they were not exactly fantastic cinema.  As Clint aged and the series progressed, the movies became less and less interesting to me.

But this book would have made a good action movie.  Every twenty or so pages there was a gunfight or some other action scene.  On the big screen, it would have been thrilling.  In a 186 page book, it was dull.  I read for the characterisation, even with characters I've seen in a handful of movies.  This book didn't give me anything new in the life of Harry Callahan.  And I'm not saying it's the writer's fault.  In 1981, when this book was published, Dirty Harry was still a viable franchise, and nothing Earth shattering could possibly happen within it's pages.  I'm sure the producers of the movie had strict edicts on what could or could not happen.

So what exactly is the point?

Well, I had hopes.  Harry is pitted against an interesting foe in Death on the Docks, a corrupt Union czar name Matt Braxton.  After Season Two of The Wire, I'm facinated by this way of life, and the thought of Dirty Harry clashing with them was an interesting one, in theory.  But when it's written like this...

Harry was tearing after the Galaxy and it's unwanted mate, no longer firing because it was senseless to do so until he came within range.  And having no time to reload, he did not wish to squander what remained of his ammunition, since it was abundantly clear he would have to save some for the occupants of the wounded Galaxy.

...it's hard to continue on.  Perhaps if the book had been written in the first person, we could have gotten a peak inside the mind of the usually stoic Mr. Callahan.  Personally, I don't believe he'd use words like squander and abundant.

After reading this, I wasn't exactly cancelling plans to read the other five I picked up on Ebay.  I will eventually give them another chance.  Each one says it was written by "Dane Hartman," but according to Wikipedia, and always reliable source of information, the books were actually penned by Ric Meyers and Leslie Alan Horvitz.

Perhaps the person guilty of putting pencil to paper on this one will not have written the next.  At least I have the pretty covers to look at.
Posted by Dan Fleming at 11:16 AM