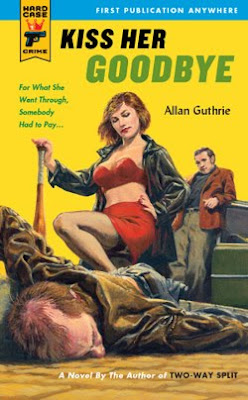 When I started this blog six months ago, one of my first stated goals was to read each and every Hard Case Crime that had been printed to date, in order. I started out of the gate strong, putting four behind me in the month of January. With over fifty titles on my shelf, I would have to maintain that one-a-week pace to meet the challenge.

As much as I love the HCC books, there were so many others out there. Authors I’d never heard of, books I’d always wanted to read. I’ve done a decent job of reading a book a week, but the HCC’s have been few and far between since then.

So is the goal still attainable?

Probably not. I would hardly consider it a failure if I don’t make it to the 50th book, but I really want to get through them. At an average of two hundred pages, they don’t take a long time to read. Is it far fetched to think I can read two of them a week while keeping up on other reading without burning myself out?

So I’m going to do the best I can. My shelf is still full with all these other titles I”m dying to read, including a bunch of nonfiction that is calling my name, so I’m going to consider the HCC books the desert at the end of the main course.

Starting with Kiss Her Goodbye by Allan Guthrie.

Ever read a book where every character was so deeply damaged that it's a wonder they are not collectively sitting in a bare room painting the walls with last nights food and feces? With each turn of the page I expected a complete mental breakdown of at least one character. My God! I've read books where the protagonist had a shitty childhood or a bad marriage, but in Kiss Her Goodbye, even the minor players have an undiagnosed psychosis. Is Scotland really that bad?


These people have serious issues.

But the book was exactly what I needed to get me back on track, violence, sex, and mayhem. Don’t be fooled by the cover and copy though. For What She Went Through, Somebody Had to Pay... I went in expecting this book to be her revenge fantasy. She was on the cover. She had a bad. She stood over an unconscious body while he leaned against a car. Not really the case.

When people in Edinburgh need to borrow money, they go to Cooper. When they don’t pay it back, they get a visit from Joe Hope.


But now Joe’s got troubles of his own. His teenage daughter’s found dead, an apparent suicide. Then the police arrest him for murder. But for once, Joe’s innocent- and with help from Scotland’s hardest men (and one of Scotland’s) hardest women) he sets out to find who’s framed him and deliver his own brutal brand of justice.

Spoiler Alert! His brand of justice isn’t that brutal. If I was going to have any complaints about the book, it would be that it wasn’t “hard” enough. Not that it was a travel brochure for Scotland, not sure I ever want to go, but I expected more of a bloodbath.

Oh well. Still a solid read with good dialogue.
“I’m in your world now, Mr. Hope. And I can assure you, I’m not guilty of anything.


Joe nodded. “Hate to disillusion you.” He drank the rest of the coffee.”But you’re just as guilty as the rest of us.”


Joe crushed the plastic cup and tossed it onto the floor. “How the fuck should I know? You haven’t been caught yet.”
Posted by Dan Fleming at 11:17 AM