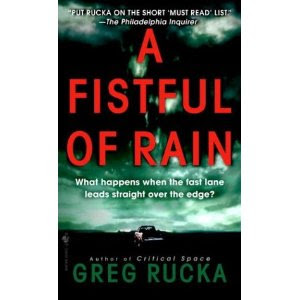 I first met Greg Rucka about ten years ago at a comic convention in Chicago.  I had no idea who he was, but this being my first convention, I was anxious to meet any professional.  He was sitting at the back of the Dark Horse booth, promoting a Grendel novel that he had just written.  I hadn't read any Grendel either, so my chances of talking shop were looking pretty slim.  Luckily, my friend Gibran had some familiarity with him and Grendel, and is a much better bullshitter than I ever will be.  The man could strike up a conversation with a deaf mute and make it work.  So he got Rucka talking.

And the man can talk.  He went into detail about his works, which at the time mostly consisted of Whiteout, and future projects he wanted to line up.  At the time, he described only having an image of Wonder Woman's boot on Batman's head, but knew there was a story there.  A few years later, that was the cover of an OGN, Wonder Woman: The Hiketeia.  I told myself I needed to get reading this man's stuff.

Over the next few years I got into all his comic work.  He wrote great runs on Detective Comics, twice, introducing Sasha Bordeaux, a bodyguard to Bruce Wayne who would eventually go on to play a major role in his run on Checkmate, and Kathy Kane, the new Batwoman who would cause many a media ripples with her sexuality.  He, along with Ed Brubaker, introduced us to the Gotham City Police Department in Gotham Central.  In that title he was allowed to explore the character of Renee Montoya more than any other writer previously had, laying the groundwork for her to eventually become the new Question during the series 52, which he also had a hand in.  His fingerprints have been all over the DCU for the past ten years, and the characters are better for it.  But he also did some time over at Marvel, getting the chance to write Wolverine, Elektra, and Black Widow.

But besides all the comic work, Mr. Rucka has also made a splash with his novels. The Queen & Country series has gotten two, with a third on the way.  And his character Atticus Kodiak has quite the track record as well, going from professional bodyguard to perhaps the most dangerous man alive over the span of a few novels.  Yet each book he writes is littered with his usual tricks, strong characterization and lightning quick plots.

Greg Rucka is excellent at two things, putting a character through what should be the worst day(s) of their life, and writing strong female characters. Nobody does self-destruction and strength like he does.

From Renee Montoya in 52, to Carrie Stetko in Whiteout, to Tara Chace in Queen & Country, these are all woman who can just as easily kick your ass or put down a bottle of Jack. Their flaws are many, their strengths, possibly more. Did I mention he also wrote the best Wonder Woman of the past two decades?

Miriam of A Fistfull of Rain is no different.  She's an absolute fucking mess, the kind of girl you find incredibly hot, but then notice just how drunk she is.  The animal part of you wants to hit on her, but the rational side is screaming to keep away.  To make it even harder to decide, she's a rock and roll queen, the brains behind her band.  And while her small body might not have the martial arts capabilities of Wonder Woman, she has strength in different ways.  She's determined and stubborn, possibly even a little stupid brave.  But she sure as hell isn't good at making decisions.

But what she is, is interesting, and when you tell a story from the first person narrative, that's a quality more important that any plot twist.  I had stayed away from this book mostly because it wasn't part of the Atticus Kodiak series.  I adore those books, and while I have always wanted to read this particular title, it always took a back seat.  I picked it up on the cheap a month ago and figured now was as good as a time as any.  And I'm glad I did.

The photos are invasive, obscene, and all over the internet for anyone to see.  How they got there, where and when they were shot, and by whom, Mim has no idea.  and before the investigation into the matter even begins, a brutal murder makes it clear that whatever Mim thinks her life has been up to now, she's about to learn it's all a lie.

The kind of lie that will kill.

A Fistfull of Rain was written with everything I admire about Rucka, so much that I wouldn't mind if did a few other "one off" novels with new characters.  Hell, if he can make a video game tie in novel interesting (Perfect Dark), he can write just about anything.

And if you happen to find yourself at a comic convention, take the time to attend any and all panels he might be on.  I'll guarantee you'll be entertained and will learn valuable lessons on writing.   He taught me that every character has a secret they want no one to learn, and it's something I always keep in mind, not just when writing, but reading.
Posted by Dan Fleming at 11:21 AM