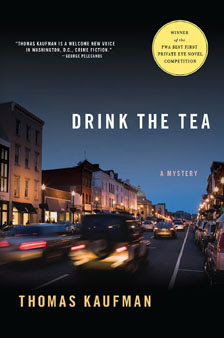 Thomas Kaufman was the first writer to approach me when I first started writing this blog.  He sent me a very nice email, notifying me that his debut novel, Drink the Tea, was coming out soon.  I gladly ran a spotlight for the day it came out, and he was nice enough to offer a future interview, for which I will soon take advantage of.
Now came the hard part, reading and reviewing the novel.  This would be the first book I'd be reviewing from someone I had previous contact with.  It was easy to have high hopes for it, as it did win a PWA competition for Best First Private Eye Novel , plus there was a quote from hightly esteemed writer George Pellecanos on the cover.  What could possibly go wrong?
Thankfully, nothing.
From the author's website.
Willis Gidney is a born liar and rip-off artist, an expert at the scam. Growing up without parents or a home, by age twelve Gidney is a successful young man, running his own small empire, until he meets Shadrack Davies. That's Captain Shadrack Davies, of the DC Police. Davies wants to reform Gidney and becomes his foster father. Though he tries not to, Gidney learns a small amount of ethics from Shad - just enough to bother a kid from the streets for the rest of his life.

Now Gidney's a PI, walking those same streets. So it's no surprise that when Gidney's closest friend, jazz saxophonist Steps Jackson, asks him to find Jackson's missing daughter, Gidney is compelled to say yes -- even though she's been missing for 25 years. He finds a woman who may be the girl's mother -- and within hours she is killed by persons unknown. The police accuse Gidney of the murder and throw him in jail.

Maybe Gidney should quit while he's behind. But when his investigation puts him up against a ruthless multi-national corporation, a two-faced congressman, and a young woman desperate to conceal her past, Gidney has no time left for second thoughts. In fact, he may have no time left at all.

Gidney is a fine addtion to the PI genre.  He's been around the block for some time, never once a cop, but actually raised by one.  He's got the street smarts and the connections to get what he needs, and for the most part, doesn't piss off everyone he meets.  Unlike other noir lotharios, he's pretty akward around women, especially Jan and Janet, two new age lesbians who might be his best friends.  It's never made quite clear why they are friends, but I'm hoping that will be explored in future novels.

And speaking of future novels, I think Willis Gidney has a real good shot at catching on as a series character.  So much of his life was mentioned only in passing, such as his ex-wife Karla, that I was immediately interested in his back story. Which led to the part I enjoyed most about the novel, Gidney's past.  Every few chapters we'd be given a glimpse of how he grew up in the system; passed around as a foster child, forming cliques in the juvenile home, and a personal favorite of mine, using comic books as currency. It's not something we are normally treated to with PI fiction, a  portrait of an investigator as a young man.  Usually they are retired cops, or even reformed criminals, but it was nice to see one "growing up," if only for a little while.  (I cannot picture Matt Scudder, or Patrick Kenzie as teenage hooligans, nor I'm sure I'd want to.)

If I had one minor complaint about the novel, it's that there are too many characters to remember.  It's not necesarrily Mr. Kaufman's fault, as I usually have this problem with intricate conspiracy plots.  Many of the bad guys blend in together after a point, especially if you had to put the novel down for a few days, which I did.

But that's not too say there were not some great minor characters.  Count me in if a follow up novel involves the homeless fellow Augustus.  He's got such great potential as a secondary character, with an unusual talent that is wonderfully used near the books conclusion.  And Jan and Janet, with their daughter, Emily, were charming each time they appeared.

Overall, I'd give this book a solid B+.  Drink the Tea is exactly what you want from a private eye novel. It's faced paced, with interesting characters, a unique local, great dialogue, political intrigue, and perhaps the best use of the EPA I'd yet to read.

More on Thomas Kaufman can be found on his website.
Posted by Dan Fleming at 11:07 AM