The Long Con Week 14 - The Confession 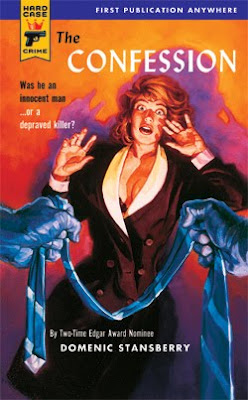 I had a sensation those days that my life was building toward something. Toward what I don't know.  Though perhaps I am not altogether honest when I say that. I knew what had gotten me into this situation, and where it had led me in the past.  Nonetheless, I felt at times an exhilaration- as if I were about to break free, to satisfy all my vagrant impulses- and then I would remember Grazzioni and his wild mouth, I would feel the trap closing in.

I love an unreliable narrator.  Unfortunately, in crime fiction, we usually follow the thought process of the duty bound detective, or the tenacious private investigator, guys and gals we are suppossed to trust.  They might have secrets, but they don't usually lie to us.  Even in cases where we might follow the killer, we know where we stand.

With Domenic Stansberry's The Confession, we are left to decide for ourselves if Jake Danser sides with the angels or the devil.  Personally, when the main character is a forensic psychologist with a pony tail, I'm not going to trust him.  I won't blink twice at a biker with long hair pulled back, but combine khakis and a polo shirt with a pony tail and I'm instantly suspicious of his motives.  God help him if he is wearing sandals.

It seems a few people in Danser's past have had a habit of dying, including a recent mistress.  The DA, now his estranged wife's boyfriend, has it out for him.  He's convinced Danser did her in, along with some unsolved crimes that fit the same modus operandi.  But Danser is a highly regarded psychologist, terribly smart, and while his character might be flawed, he is not necessarily a murderer.  He's put many a man behind bars with his testimony, and he certainly has enemies.  When the charges are brought, he does whatever necessary to prove his innocence.

But do we believe him?

Stansberry does a fine job of adding plenty of doubt to the story, so that I wasn't always convinced of the facts as they were presented, despite my preconceived notions.  There are clues dropped that could convince any reader of guilt or innocence, and he leaves it up to our judgement for 99% of the story. There is a definite conclusion, allowing us armchair psychologists to either gloat or pretend we were right all along.

Honestly, I think this novel shows more about the reader than the characters.  Right from the start, thanks to the aforementioned pony tail, I was sure of guilt.  Each turn of the page just convinced me further, even when reasonable doubt was introduced.  I never believed him.

Was I right or wrong?  Spend a few hours with the book and find out for yourselves.

I just know I shouldn't serve jury duty any time soon.
Posted by Dan Fleming at 9:45 AM