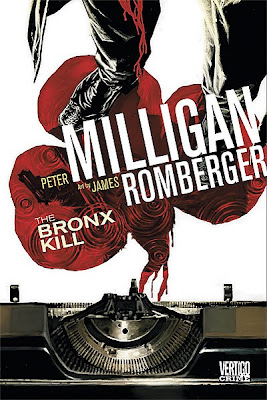 I'm a sucker for personal misery and decending spirals into hell.

Yeah, I'm that kind of guy.

Martin Keane hates his father.  He doesn't so much as come right out and say it, but the feelings are there with every word spoken between him.  His father comes from a long line of cops, and he's never been pleased with his son's choice to become a writer.

But it's his own fault.  Years ago, when Martin was just eight, his father brought him to the Bronx Kill, described as " the saddest, most miserable and forlorn stretch of water in the whole country."  It's in this fabulous location he tells his son of how his grandfather comes to an untimely end, and at that moment, he concludes he will never be the man his father is, nor does he want to be.

Fast forward two decades.  Martin, now languishing in self-loathing after the critical drubbing of his second novel, is at a bit of a crossroads.  His wife, after learning of his families history at the Bronx Kill, has become obsessed with it.  She's an artist, and for some odd reason she finds it almost beautiful.  An attempted mugging inspires her in a strange way. She needs to paint it.  Martin, also inspired by her hurtful words (she stood up to the assailant, not him) decides he needs to get away to write a new novel.  Off to Ireland he goes for four months, leaving Erin behind.

At this point, the graphic novel switches up styles a bit, leaving us to read Martins new novel, corrections and all.  It's a little disconnected at first, but as both stories progress, it's easy to see how they might eventually interesect.

Not long after, Martins life begins to unravel.  Soon after returning, his wife goes missing without a trace. Police blame him, mostly because he is the most viable suspect.  Ironically, if it were not for the influence of his father, he would be sitting in a jail, instead of free to search for answers.

Like most good mysteries, the answers he has been searching for might be the last words he wants to hear.

While the story is fantastic, it's the art I had some trouble with.  James Romberger has some great pages in him.  His page compositions and storytelling skills are fantastic.  The character designs were excellent, with each character looking unique.  Unfortunately, the consistency of the art is lacking.  Some pages feel like they were merely thumbnails, with sketched in shading.   They were few and far between, but each time I saw one it instantly took me out of the story.

Overall, the book was very good.  Milligan's story was engaging, and hit upon many of the themes that, as a reader, I can't get enough of.  His use of prose added to the story so much that I would consider reading the book within the book.  Perhaps Milligan has a novel or two in him.
Posted by Dan Fleming at 9:00 AM