The Long Con Week 15 - Home is the Sailor 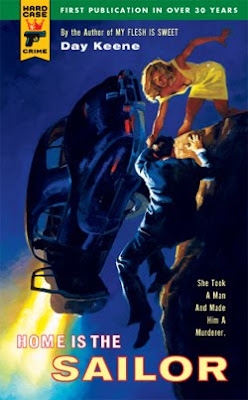 "I threw the empty bottle at the wall.  To hear it smash.  Then I rolled off the bed onto the deck and crawled into the head on my hands and knees, barely making seaway.  I was too drunk to stand under the shower.  I filled the tub with cold water and lay in it, letting the water run, rubbing the cold into my scalp and flesh.  I wanted desperately to get sober.  So I could walk up to the bar and tie on a real one this time."

I don't know much about sailors.  They like to curse, or else there would not be that old saying, "curse like a sailor."  From another idiom, I know they like to have sex.  Other than that, my knowledge of the sea comes from Popeye and an old district manager and his tales of torpedo juice.

And if sailors are anything like Swede Nelson, I'm not to sure I want to know them.

Swede has come ashore after a long time on the sea.  He's got $15,000 and the hopes of going back home, finding him a wife, and buying a farm.  Only he's got a love for booze, and with the booze comes fighting.  His first night on dry land and he nearly kills a man.  He wakes up later in a room at the Purple Parrot, still hung over and confused as hell.

He knows one thing for sure, the proprietor of the Purple Parrot, Corliss Mason, he's in love with her.

And it's because of that love that he will ignore every rational pieces of advice he receives from the one character in the book that might be good for him.  He will go against his better judgement and help disappear a man that Corliss kills, a man she says raped her.  Every word out of her mouth is gospel, regardless of the trouble it pulls him into.

As a human being, I want to stay as far away from him as possible, but as a noir character, he's perfect.

Pretty soon, he learns that Corliss might not be the woman she says she is.  He gets a few visits from law enforcement, including the dreaded FBI.  He's in way deeper than he ever wanted to be, and as beautiful asd she is, perhaps Corliss isn't his dream come true.  I'd bet a boring farm life begins to look pretty good.

Day Keene writes a hell of a story.  It's face paced, well written, and while some pretty unbelievable events take place, the motivations behind every action are filled with truth.  His characters are mostly unlikeable, which for a story like this, is perfect.

After reading this book, I know a little more about sailors.  I think I'll avoid the sea.
Posted by Dan Fleming at 8:56 AM