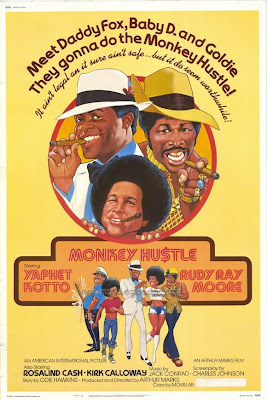 You ever see a hustler lay down his line?  When he's down, he screams, he hollers, he scratches to get over.  He splits before he lets the rest of the jungle know he's full of it.  That's the monkey hustle.
I'm not sure what to say about Monkey Hu$tle.  For one, I'm quite certain I didn't follow the story correctly.  I know Daddy Fox (Yaphet Kotto) was training a bunch of "young bloods" in the way of the monkey hustle.  I know they were using that new found knowledge to run some scams on a local merchant.  I also know they were trying to steal musical instruments.
The reasoning behind the musical instrument theft was apparent enough.  You see, one of the boys, a drummer, his girlfriend Vi was possibly dating another man while he, Player, was out on tour or something.  And his boys, they beat the hell out of that man.  So that guy, he somehow broke into Player's apartment and broke his "skins."

And Player, he needs drums in order to play a block party benefit, which will hopefully make Alderman Black realize that a freeway coming through their neighborhood is a bad thing.  This plan is opposed by everyone on the block, including Rudy Ray Moore, who might be a pimp/hustler named Goldie.

If I sound vague about all this, I apologize.  It's because the movie was vague.  Nothing really gets explained in detail, and I had to pay attention to the credits to learn everyone's name.  The script does not really focus on the details.

What energy the writer did not spend on plot/structure, he spent on dialogue.  This film absolutely bursts with slang, and although I didn't understand 60% of the words, I could not deny it's poetry.

"This is a light weigh blowing wind.  He's trying to cop some coin that never touched my skin."

That translates to "this guy thinks I owe him money, but I never had it."

Or how about this pick up line from Goldie.

"Mama, you know we could blend together like fat meat and greens."

You say that while wearing a gold jumpsuit and I guarantee those ladies will follow you around.

The reason I watched this film, and it should come as no suprise, was Yaphet Kotto.  He has become ingrained in my memory as Lt. Al Giardello, that I needed to see him in another role.  The intensity and charm that he used for seven seasons on Homicide worked back in 1976.  His character, Daddy Fox, absolutely oozes with charisma and charm.  It's easy to see why the neighborhood boys would want to work for him, and more importantly, would want to learn from him.  He's got the street lingo down, but there is also an intelligence behind words.  Daddy Fox is an easy character to like.

The other actors, including a very young Lynn Harris, hold their own.  Honestly, the worst actor of the bunch was Rudy Ray Moore.  It might not be his fault, as Goldie really held no importance to the movie.  He was just coming off Dolemite, so it's possible he was just put in the film as a name.

Would I highly recommend Monkey Hu$tle?  Probably not.  Those looking for a tight crime caper would be disappointed.  But those in the mood for a nice street level movie, which had great on location shots of Chicago, might enjoy the 90 minutes of fast talking hustlers.

I certainly did, and once I pay a visit to Urban Dictionary, I might know what was actually being said.