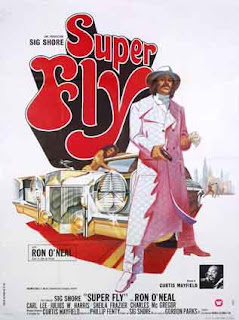 While not as good as I would have hoped, it was still an enjoyable film.  Ron O'Neal is excellent as Priest, a coke dealing pimp who realizes he needs to get out of the game before he winds up dead.  He takes his entire savings, hoping to make one last purchase that will net him a cool million to retire with.  His speach to "The Man" at the films conclusion is enough to make anyone get up and cheer.  Also, Curtis Mayfield's music is as catchy as ever. I ended up singing "I'm your Pusher Man baby" to myself for the next hour.  And unlike most blaxploitation DVD's, Super Fly had some nice bonus features.
Foxy Brown 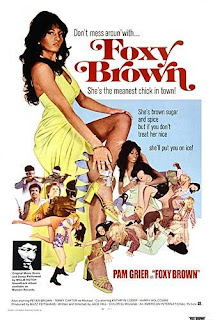 Man oh man, this film was way more violent than I ever remembered.  Perhaps because the first time I saw it, I was fifteen, and was more focused on Pam Griers other attributes, which are on display an awful lot in this film.  But we've got about a million shootings,  beatings, a propellor induced death, and a little bit of member removal.  Miss Foxy Browns got some nice kung-fu moves, and major props to the costume and hair designers, because Pam Grier must have changed clothes and hair styles every five minutes on her way to avenging her boyfriends death.  A major highlight of the film was Antonio "Huggy Bear" Fargas, playing Foxy's shady brother Link.  He's just awesome in everything.
Friday Foster 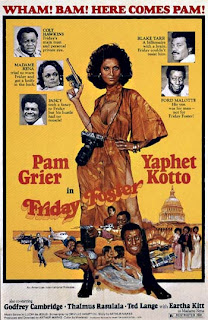 Have you ever wanted to see a Yaphet Kotto vs. Carl Weathers fist fight?  I know I have.

Another gem from director Arthur Marks, Friday Foster stars Grier as the titular character, an ex-model photographer who photographs an assassination attempt on the richest black man in America and gets herself pulled into a vast conspiracy.

This was an adaptation of the syndicated comic strip of the same name, though I doubt newspapers would have allowed this much sex, violence and Eartha Kitt

A fast paced film with some great performances, but a rather weak ending.
Posted by Dan Fleming at 11:08 AM