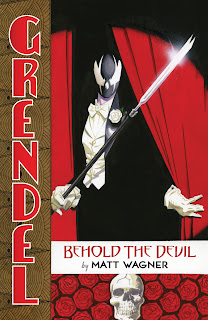 Currently, comics writer Mark Millar (Kick-Ass) is drumming up a whole lot of interest in his new series, Nemesis, by saying it is essentially the story of "What if Batman was a total cunt?"  Hate to tell you this Mr. Millar, but that story has already been done, and done better than you can ever hope to pull off.  It's been published by Dark Horse for some years, and there are plenty of beautiful hardcovers in the bookstore waiting to be purchased.  If you were hoping on breaking some new ground with your "villain," you are about twenty years too late.  Hell, this guy even fought Batman some time ago.  And after reading the first issue of Nemesis (which wasn't bad, just didn't live up to the hype) I'm pretty sure your guy would get his pale white costumed ass handed to him by the Devil himself.

I give you Grendel.
For years, the life of the original Grendel, Hunter Rose, has been accessible only through his private journal, but torn out and forgotten is a secret too terrible even for its pages.  Behold the Devil follows Rose through this lost period early in his criminal career, under the scrutiny of not only the police and media, but also the prying eyes of an unseen--possibly supernatural--pursuer.  Uncharacteristically shaken, the criminal mastermind is forced to take steps that redefine the evil of the entity known only as Grendel!
Believe me when I say that you will be hard pressed to find a book this beautful, yet this violent, in the comic book world.  If I'd compare it to anything, it would be the films of Akira Kurosawa.  I'm torn, wanting to take the time to scan not one, nor two, but THREE double page spreads which start Chapter One, but not wanting to spoil it for you.  Nothing but words and blood, but ever so pretty.
Pure poetry.
Hunter Rose is a rich socialite, who happens to have taken in a ward.  (Sound familiar)  He is also a best selling author and hailed as a literary genius.  But at night, he is the fearsome Grendel, the masked devil who secretly controls all the organized crime in the city.  He is ruthless and feared, and as those opening pages show, deadly.
I'm relatively familiar with the character, having read random stories through the years.  But Matt Wagners Grendel stories do not begin and end with Hunter Rose.  There are stories of his "grand-daughter," futuristic stories with cyborg Grendel, and many in between.  The book, in an amazing well drawn sequence, allows Hunter to "see" all of these futures, when his legacy will be changed and expanded.  Honestly, I didn't know everything that was shown.  According to the back of the book, there are about twenty books, so far, in the Grendel series, this being the latest.
So would this book be the best place for a reader to start?  Possibly. It's a fairly straight forward, yet engaging, story.  Grendel puts a few rival gangs in their place, all while being pursued by the Wolf Argent (his arch enemy), a reporter, the police, and what appears to be some sort of demon.  Along the way he kills lots of people and has that aforementioned vision of the future.  It's easy enough to understand without all the backstory that most of us do not possess.
And again, there is the amazing art.  Simple lines, yet stylized, with inventive layouts.  Told in black, white and blistering red, each page is simply stunning.  Okay, I couldn't resist.  Here are those three pages. I apologize in advance for the center distortion, but these pages were scanned from a hardcover.  You want to see them in their full blown glory, buy the book.  You know you want to. 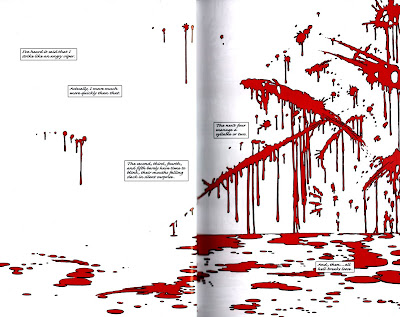 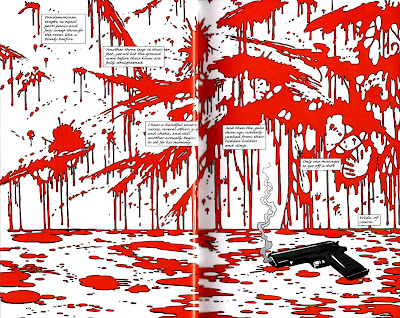 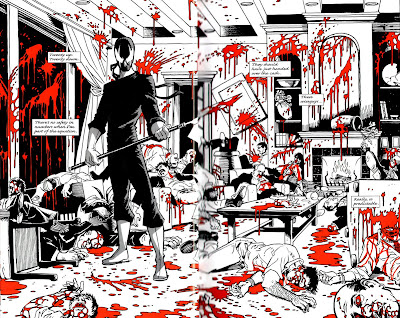 Beautiful in their wrath, aren't they?
Overall, the book did exactly what it should have done.  I enjoyed each and every turn of the page, and afterwards, dug through my shelves to reread the Grendel stories I do have.  Believe me, I will be purchasing more.
Posted by Dan Fleming at 11:07 AM