New Comics Wednesday Week 14 - Do Not Fall In New York 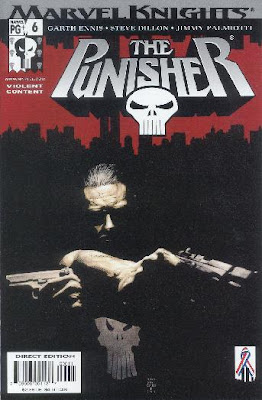 -
Few writers can completely "own" a corporate character.  Try as they might, when their run on a title is over, someone else can waltz in and obliterate everything the previous writer(s) created.  It's frustrating for a reader, getting so used to one voice, only to have it replaced the next month.

That has not happened with the Punisher.  He will always belong to Garth Ennis, whether or not his name is in the credit box.

Garth came to the Punisher during a difficult time.  He'd been over-exposed in the 90's, and during his last incarnation, he was some sort of angel-thingy, complete with mystical guns.  Marvel Knights editors, Jimmy Palmioti and Joe Quesada, were smart enough to give Mr. Ennis the book, and let him go about his bloody, violent, business.

The Punisher was back, well received and critically acclaimed, with Ennis and Preacher cohort, Steve Dillon's 12 issue run, Welcome Back Frank.  In the current comics climate, twelve issues would have been enough.  Many creators show themselves the door after one year, afraid to possibly fuck up a good thing.  Fear is not something I'm sure Garth is familiar with, after all, this is the man who has made villians out of armless/legless matriarchs and tiny men with a love for meat.

So he started again with a second Marvel Knights series of the Punisher, and despite a few issues break, he carried that on for a few more years.  And when Marvel created it's mature MAX line, the Punisher was the first to jump ship.

But I'll talk about that series later. Today, I'm here to talk about, like last week, a single issue that blew all preconceptions of what a character was.

To this point, the Punisher was the "cleaner" of the Marvel universe.  He mostly kept his nose out of the affairs of the superpowered pack, focusing instead on street level villainy.  In particular, he had a mean hard on for the Mafia, a broad organization that provided many targets.  (It should be noted that it was a mafia hit that accidentally killed his entire family, thus feeding his need for vengence.)

The Punisher was a killing machine, laying waste to anyone who was even remotely tied to organized crime.  He was brutal, efficiently, and at times, unbeliveably funny.  Not in that annoying Jim Carrey way, but more in a Coen brothers way.  Come to think of it, a Coen Brothers Punisher film would be amazing.

Issue Six was a revelation, and for me, a turning point in how I thought of the Punisher.  In summation, in this issue Frank is hunting Joe Perrett.  Joe recently lost everything.  His business failed, his wife left him and took the kids with him.  Then something inside him snapped.  He went to the home of his ex-wife and shot her, then the children.  To this point, it's a typical Punisher story.

Only Frank once knew Joe.  Back in the war, he had saved Franks life.  It's not enough for him to be forgiven, but Frank wants to find Joe before the police do.  He wants to be the one to find him, and kill him.  Not for vegeance, but for mercy.

Over the 22 pages we see a man completely fall to pieces, and a city that ignores him.  Franks opening monologue says it all.

Do not fall.  Forget the things you've heard about the place.  About the new New York.  It means Times Square's like Disney World.  It means Hell's Kitchen is called Clinton.  It means the park is full of tourists.  It doesn't mean they'll catch you when you fall.  the old New York is waiting just below the surface.  It's in the eyes of the clerk who declined your card.  The bank manager who forecloses on your house.  The surgeon who tells you your wife didn't make it.  It's the discomfort and disgust that your misery awakens in them, as they look away, at anything but you--as they lock you out of the club.  You're left standing there thinking--hey, I thought I'd made it?  But no one cares about you when you're damned.

I'm sure this issue is collected in numerous trades and hardcovers, in fact, I think they are on my shelf.  But there is an essay written by Garth  on the letters page.  This issue came out a few months after 9/11, and in his brief essay he writes about what it's like to be transplanted to the new New York.  It's short, but powerful, and worth the full price of a back issue.
Posted by Dan Fleming at 10:42 AM