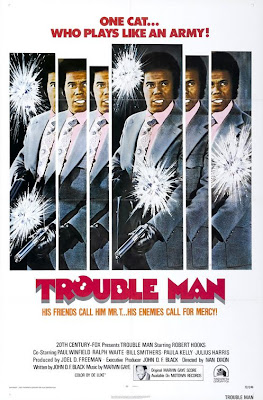 Trouble Man...you jive him, he’ll wash you away.

Question: How do you respond to when asked this question? “When am I going to see you again baby?”

Answer: Straighten your tie, button your coat, and say “I’m gonna have to think about that girl.” Immediately proceed to your sweet ride, put on your sunglasses, and drive away to your fancy apartment as Marvin Gay plays on the radio.

But don’t be afraid to ask him for help while he plays, just be sure to stand behind the line. Does your brother need a bail bond? He’ll guarantee it, because no man is fool enough to run out on T. Did a neighborhood baby fall through a broken down railing at a nearby apartment? Talk to T, and the owner of that building will show up in person at the hospital to express his sorrow and pay the bill.

You got trouble, you call the Trouble Man.

Robert Hooks does a fine job playing T with just the right amount of detached cool. He’s got no worries in the world, and everyone seems to love him. The ladies can’t get enough. The men all need his help. Hell, even the cops respect him enough not to bother cuffing him when they bring him in on a trumped up murder charge.

If the movie has one glaring fault, it’s the plot. See, Mr. T is hired by ex-pimp Chalky (a fine Paul Winfield) and his partner honkey Pete (hey it’s the dad from the Waltons, Ralph Waite) to protect their big money dice game. Mr. T, being as civil minded as he is, agrees to for the hard bargain price of one night’s take. Reluctantly they agree, but T stands by his word, he will find out who’s been doing the deed to them.

Unfortunately for T, it’s all a ruse. Chalky and Pete want to take over Mr. Big’s territory. They kidnap one of his men, Abbey. At the dice game, one of the “robbers” happens to be wearing a coat just like Abbey’s. They split after taking the money, only Pete’s boys release a masked Abbey from an adjacent apartment. Chalky and T erupt from the room just in time for Chalky to shoot him dead. Chalky and Pete come to the conclusion that Big must be making a move on them, only T doesn’t care. He leaves.

As he visits a boxing club, the police arrive to take T in. It seems an anonymous caller tipped the cops off. It was T who shot the man dead and dumped the body. Yeah, not a well thought out plan. T goes with the cops, and explains to the Captain that if he wanted the man dead, he would have done a much better job of dumping the body. Also, there is no physical evidence to tie him to the murder. Oh yeah, and all the eye witnesses. T could just roll over on Chalky, but he’s not that type of guy. He wants to know who fingered him.

He leaves the station, only to be accosted by Big’s men, who also got a phone call. Being the badass that he is, he dispatches them easily enough, but pays a visit to Big anyway. He’s getting pissed now, and arranges a meeting between the three to iron out the differences.

From there, it just gets more convoluted.

“T has one advantage, and that’s his cool, but that’s enough baby, cause he’s thinking all the time, and if he wants your ass he gets it.” Chalky to Pete, as he realizes their plan wasn’t exactly as thought out as they hoped.

So while the plot is weak, and honestly, that can be blamed on idiot criminals, the movie works for me. The fight scenes were not the best, but T’s assault on both Chalky and Pete’s hideouts were straight out of a video game (a good thing). It was a high powered ending to a slick film. Well worth the time.