In the Box with Victor Gischler 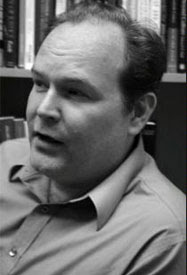 Victor Gischler is the author of 4 hard-boiled crime novels. His debut novel GUN MONKEYS was nominated for the Edgar Award, and his novel SHOTGUN OPERA was an Anthony Award finalist. His work has been translated into Italian, French, Spanish, German, Czech and Japanese. He earned a Ph.D. in English at the University of Southern Mississippi where they beat him with rolled up newspapers and fed him raw liver. His Fifth novel GO-GO GIRLS OF THE APOCALYPSE was released by the Touchstone/Fireside imprint of Simon & Schuster and followed by VAMPIRE A GO-GO. His new crime novel THE DEPUTY is coming soon from Tyrus Books.


MYIC:  Not really a question, but tell us a little about The Deputy.


VG: The Deputy is my modern western, High Noon for the Weezer generation. Part-time deputy Toby Sawyer finds himself way in over his head during one long hard night in the middle of nowhere town of Coyote Crossing, Oklahoma. There's some corruption in the town and Toby is a little slow on the uptake about battling it. In between getting shot at and beaten up, Toby has to deal wiuth his own personal problems, finding himself caught between his wife and his girlfriend. Harboiled fun.


MYIC: What brought you back to the crime genre, after the genre bending horror of Go-Go Girls of the Apocalypse and Vampire a Go-Go?

VG: Actually, I just write the story I want to write and try not to let genre or marketing or anything like that get in the way.


MYIC: I know you are currently writing about 47 Deadpool books for Marvel. Any other stories in the works, or are you just sticking to the Merc with a Mouth?

VC: Well, Merc with a Mouth wraps as of issue #13 ... but then Deadpool Corps sort of works up a head of steam, so I'll still be in the Deadpool business for a while. Marvel has me on to some new stuff ... but that's hush hush for now.


MYIC: What is your favorite crime book/film? Or what are you enjoying right now?

VG: That's a tough one. So much good stuff out there. I still think Scott Phillips novel THE ICE HARVEST is a great read. Killer Inside me by Thomposon is good too.


MYIC: If you could get away with any crime, what would it be?

Victory Gischler's new book, The Deputy can be ordered here , here , Tyrus Books and from any of your local bookstores.  Read his thoughts and other important stuff over at his blog.
Posted by Dan Fleming at 8:00 AM