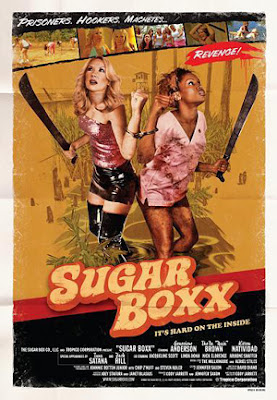 Is it any good?  Not really.  The acting is awful, the dialogue terrible, the nudity, not so bad.  A bare breast seems to appear every two minutes without reason, pretty much eclipsing the story-to-boob ratio of Caged Heat or Black Mama, White Mama.  I bet the production got a hell of a deal on easy to remove tube tops.

An reporter goes undercover in the Florida penal system to expose, well, something I'm sure.  Seems a prostitute got some hard time, and to a seasoned reporter like Valerie March (a terribly wooden Geneviere Anderson) that smells like a story.  She assaults a cop, he plants a brink of drugs in her trunk, and she gets fifteen years.  Now she can explore the story from the inside.  The girls can get an easier life if they prostitute themselves out.  Good clothes and a pool, sure beats the scantily dressed hard labor.  But Valerie, or "Angel",   is going to lead the uprising.  And it will be violent.

Sugar Boxx had the potential to sit on my shelf alongside Machete and Black Dynamite, but despite the nudity, it really played safe.  Writer/Director Cody Jarrett could have celebrated the weaknesses of the girl-in-prison films instead of simply copying them.  Or it could have gone the way of Machete, with it's gleeful over-the-top violence.  Instead, it did neither, and for that I consider it a noble failure.  Entertaining, but not worth repeated viewings.

At least exploitation legend Jack Hill has an appearance as a corrupt judge. And I learned how to convince an unconscious man that he did indeed have sex while out cold.
Posted by Dan Fleming at 9:58 AM