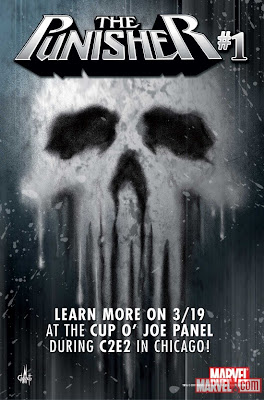 Although "gone" wouldn't necessarily be the correct word, Greg Rucka has been missing from "mainstream" comics for the past year, perhaps two.  Thanks to his fantastic book Stumptown (with Matthew Southworth), I haven't missed him a bit.

However, when he did write for the Big Two, I was always interested in his character interpretation.  He did wonderful things with Wolverine, Elektra, and Wonder Woman, characters that interest me only marginally.  Books like Batman and Batwoman were made for him to write.

Now it seems like he's back, relaunching Punisher for Marvel.  I haven't purchased a Marvel title in monthly form   for the better part of the year, but that will be changing.  If anyone can fill the giant shoes Garth Ennis left behind, it's Rucka.

As you can see from the picture, the official announcement won't happen until Saturday, but the sometimes reliable Bleeding Cool broke the news yesterday.

Keep your fingers crossed.
Posted by Dan Fleming at 10:15 AM