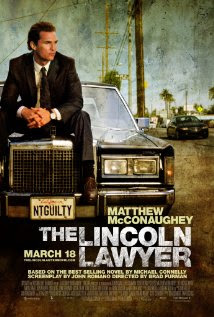 Actually, that's a great idea.  Just forget Matt is even in the movie.  If you are like me, he's not usually a reason to go see a movie.  I loved him in Dazed and Confused, tolerated him in a Time to Kill, ADORED him in Reign of Fire, but after that...the less said the better.  He's wasted his talents in stupid formulaic romantic comedies.

So lets focus on everything else this movie might have to offer.

It's based on a book by Michael Connelly.  While I cannot vouch for this particular title, I can say that Connelly has the chops, and the few books I have read have been quite good.  It's directed by Brad Furman.  Who?  I have no idea.  He's only got one other feature to his credit, the 2007 movie The Take.  Haven't seen it.

It's probably a good thing I'm not writing the ad campaign for the movie.

However, I can say this film is loaded with supporting actors that I absolutely love.  Marissa Tomei, Josh Lucas, Ryan Phillipe, John Leguizamo, Bryan Cranston, Michael Pena, Frances Fischer, and of course, the always amazing William H Macy.   Did I also mention...