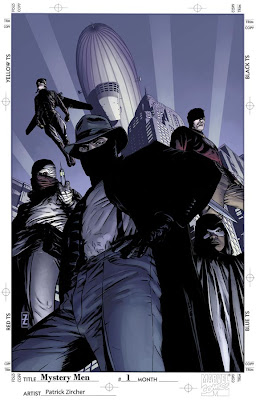 I'm not sure how I missed this news coming out of the C2E2 convention in Chicago, but it seems Marvel comics is going to dabble with pulp heroes in the 30's.  My thanks to Brad over at In the Mouth of Dorkness for posting  it yesterday. I'm not familiar with the writer of the project, David Liss, but that could actually work in his favor.  He doesn't have the years of baggage that a Brian Bendis or Mark Waid would bring, so I don't have to compare it to anything else.

The teaser images, seen over at ItMoD, look fantastic, and I hope the book is at least a critical success.  I'm not going to pretend this book will sell over 50,000, as anything even slightly off the mainstream universes ever does.  DC tried a similar thing this past year with their First Wave books, which featured pulp heroes Doc Savage, the Spirit, as well as retooled versions of the Blackhawks and Batman.  From there, The Spirit and Doc Savage got their own series, which were recently cancelled as sales dropped from 20,000 to 8,000 over the course of the first ten issues.  The initial series, First Wave, was only a six issue mini-series and was completed.

Surprisingly, or nor really, the only time these books were ever discussed were when they were first announced and at their cancellation.  Goes to show the interest just wasn't really there.  I plan on picking up the First Wave trade, as it is written by Brian Azzerello, one of the geniuses behind 100 Bullets.  And I will at least pick up the first issue of Mystery Men.
Posted by Dan Fleming at 10:43 AM