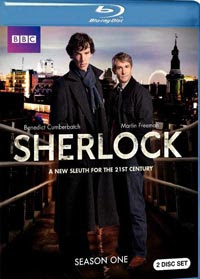 After a long time on my Netflix Queue, Sherlock has finally arrived.  I considered purchasing it blind when it first came out, but instead chose another BBC crime show, Luther, which had the known enjoyable quality known as Idris Elba.  I didn't regret the choice at the time, but would I now that I have Sherlock in my hands?

I don't watch much Dr. Who, so despite the claims from friends of mine, I have yet to be convinced that British scribe/showrunner Steven Moffat is a genius.  Sorry, but I've never really gotten into the adventures of the good Doctor and his Tardis.

But one episode of Sherlock, the reimagining of everyone's favorite detective to reside at 221B Baker St, and I'm not only convinced,  but ready to preach.  The first episode, A Study in Pink, was flat out brilliant.

The terrible twosome, Watson and Holmes, were perfectly cast. Perhaps the greatest English name I've ever heard, Benedict Cumberbatch, is a revelation as Sherlock, playing it as a cross between the misanthropic House and the detail oriented Patrick Jane from the Mentalist.  I was only familiar with Martin Freeman from the British Office, but his Watson is a force all his own.  His Afghanistan wounded doc is slightly lost, but it's easy to see the warrior underneath.  He's not going to back down from anyone, let alone Holmes.  The rest of the cast is solid, from the beleagured Lestrade (Rupert Graves), to the irritating Dr. Anderson (Jonathan Aris), to the wonderfully brilliant Mycroft Holmes (Mark Gattis).

Some might be put off by the modern aspects of the show, particularly Sherlock texting, but rest assured its just another tool at his brilliant disposal.  And if anyone can turn a cell phone into a sleuthing device, it's Holmes.  It adds an interesting twist the the Sherlock we have all grown to love, and honestly, makes him better.  My young son adored the fact that Sherlock didn't run around smoking a pipe (he's on the patch) and wearing a "stupid" cap.

Everything about this show is high quality, and I cannot recommend it enough.  I only wish the first season had been longer than three ninety minute movies, but it's not going to stop me from purchasing this on Bluray.   Bring on Season 2.