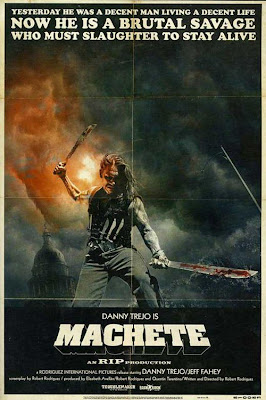 When in actuality he does indeed text.  Just once.  It's a hell of a text though.

But Machete does so much more.

The "mexploitation" flick, brought to us by the insanely creative mind of Robert Rodriguez, along with co-director Ethan Maniquis and co-writer Alvaro Rodriguez, is hopefully the first in a long line of Machete movies.  I haven't had this much fun watching a movie since Black Dynamite.

What can you look forward to if you throw this movie into your Blu-ray player?

-Rappelling with human intestines
-Cheech Marin as a shotgun toting priest
-Steven Seagal, with a terrible accent, in a movie that didn't actually go direct to video
- Lindsay Lohan as a drug addled irresponsible girl who likes to get naked.
-Jessica Alba playing twins (if you watch the deleted scenes)
-a cat used as a silencer (again, deleted scene)
-death by low rider.  And finally a reason as to why you should make your car bounce
-a performance by  Michelle Rodriguez that does not annoy the hell out of me.
-a sketch artist
-a Luchador assassin
-a convincing argument against anti-immigration laws
-an interesting new place to store your cell phone
-the best damn performance of Danny Trejo's life.

The only reason for not watching Machete is if you take heart medicine, have a fainting condition, or a weak stomach.  Seriously, there is a lot of blood.