The Best He Is At What He Does? 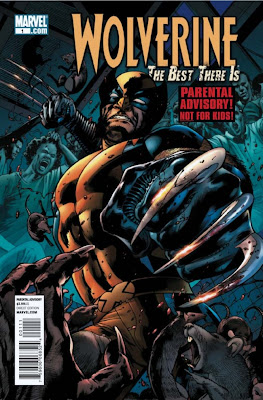 I've never been the biggest fan of Wolverine, the Marvel Universe's resident badass.  He's certainly got some qualities that other superheroes do not possess.  Besides his handy adamantium claws and healing factor, he also loves to drink, smoke, and have sex with any woman who will have him. He doesn't have a problem with killing, and will take on the jobs that others with more puritanical views of heroism won't touch.  As far as anti-heroes go, he's pretty good.

But he's also over-exposed.  He appears in X-Men books, Avenger books, and his own titles.  When that happens, he gets a little watered down, and even a little bit of him can be too much.  He's pretty one note when not written well, and that happens far too often for me to even bother picking up his books.

Right now, only one writer really seems to write him well, and that's Jason Aaron of Scalped fame.

But I'm not here to talk about that book today.

Last month, another new Wolverine title hit the shelves, Wolverine: The Best There Is.  Normally I wouldn't even give this book a second glance, but it happens to be written by a favorite author of mine, Charlie Huston.        Charlie has written the Joe Pitt Casebooks as well as numerous other books, including The Mystic Arts of Erasing All Signs of Death, which is being adapted by HBO.  The guy can flat out write.  Even his first uneven venture into comic books, Moon Knight, had certain qualities that I enjoyed.  It wasn't great, but showed some promise.

Sadly, I cannot say the same for Wolverine: The Best There Is.  It is flat out terrible.  Sure it's dark and violent, but not for any particular reason.  The story certainly doesn't hook me in, as I'm not interested in a drugged out Wolverine at a rave type thing.  Dialogue is awkward and often unnecessary.   It might just be the worst comic I've read all year.  Were this from a rookie creator working on an non-established character, I'd be a little easier on it.  For this book from these creators and company, especially a #1 issue, there is just no excuse.  As the cover says, this book certainly isn't for kids.  But it's not for adults either.
Posted by Dan Fleming at 10:12 AM