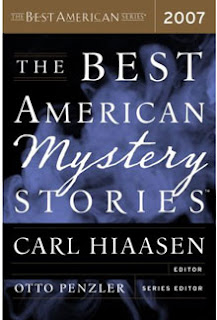 I mean this in the most flattering way, but this guy can flat out write like a meth head.  The narrative rambles.  The sentences can often repeat themselves and/or not finish.  Most of the time I didn't know what the hell I was reading.  I was confused, irritated, and constantly trying to figure out what exactly was going on.

You ever talk to someone on Meth?  It's like trying to read this story.  At least with the printed word, you can reread the last paragraph or page.  With the junkie, they just keep on going, oblivious to the fact that you might not even be following their train wreck on consciousness.

But really, for this story, it's a good thing.

William Gay's prose is strong and effective.  It brings you into the mindset of the main character, The Jeepster, and doesn't let you out.  For fourteen pages, you are stuck with him, through the bits of lucidity and the majority of incoherence.

The plot, which threads I can make out during the first reading, mostly involve his dead girlfriend and his attempts to hold on to a part of her.

They wouldn't let me in out there, they won't even let me in to see her body.  I went and look at her car.  Her blood's all in the seat.  On the windshield.  It's all there is of her left in the world I can see or touch.  I aim to have it.

Had this been a full length novel instead of a short, I would have never finished it.  The story wrestled with me enough, and chapter upon chapter of its fractured narrative would have forced me to throw in the towel.  Where Will You Go When Your Skin Cannot Contain You is a difficult read, but well worth your time.

This story originally appeared in the "All Apologies" issue of Tin House Magazine, 2006
Posted by Dan Fleming at 11:21 AM