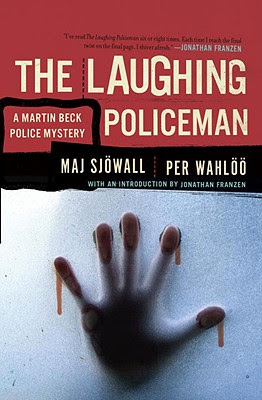 Have you ever had reading block?  It's an unfortunate condition, much like writers block, but instead of starring endlesssly at a blank page, you are overly focused on numerous words, none of which sink in.  No matter how many times you read the page, by the end you have forgotten what you just read.

It's a rare (outside of school), terrible malady, and I fought it tooth and nail throughout this book.

The novel, The Laughing Policeman, could not be to blame.  Could it?

On a cold and rainy Stockholm night, nine bus riders are gunned down by a mysterious assassin.  The press portrays it as a freak attack and dubs the killer a madman.  But Superintendent Martin Beck thinks otherwise--one of his most ambitious young detectives was among those killed--and he suspects it was more than coincidence.  Working on a hunch, Beck seeks out the girlfriend of the murdered detective, and with her help Beck reconstructs the steps that led to his murder.  The police comb the country for the killer, only to find that this attack may be connected to a case that has been unsolved for years.

Sounds exciting doesn't it?  Well, it's not, and I'm sure that was the intention of the authors, Maj Sjowall and Per Wahloo.  Their story takes place, not in the darkest corners of society, but in the everyday, mundane world that we all walk through.  Sure, the weather might be worse, which based on the wonderful descriptions, it certainly is, but this is a city, and a situation, that we all could encounter.  And it would make us miserable.

Martin Beck certainly is. He rarely laughs, even when his children give him the record The Laughing Policeman for Christmas.  While they bust a gut at the songs, he sits, stonefaced.  He's got a sour disposition, and thanks to his love of coffee, a sour stomach.  Not much in this world is going to make him smile, at least until the final page.

If you want careening car chases, furious fisticuffs, and intimidating interrogations, again, read another book.  The murder is solved through thorough solid police work, not death defying feats.  There's plenty of report reading, and witness questioning, and even some second guessing just to mix things up.  It's the story of frustrated men doing frustrating work.

Does it sound like I'm describing misery on paper?  Perhaps that's why it took me a week to read it's 211 pages.  Could it's miserly attitude rubbed off on me?

It might have, but I assure you, it was still a book worth reading.  I've got a feeling it might have been one of the most accurate representations of a policeman's life that I have ever read.  Now I understand why they are always so cross when they pull me over.

Now it's time to go watch the Walter Matthau film based on book.  If anyone can nail the despair so present in the novel, it's him. 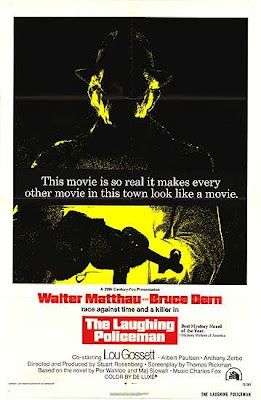