The Long Con Week 18 - The Girl Who Played With Fire 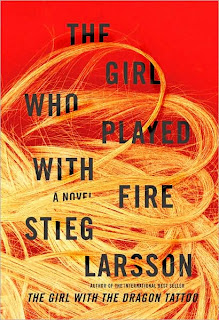 Some authors can write interesting, believable characters that live a similar life to ours. They eat similar foods, drink similar wine, maybe even sleep with the sleep with similar people. But somehow their lives are infinitely more interesting, and while unbelievable events may transpire, we are with them every step of the way because they feel real to us.

Other writers have mastered dialogue. They can have their characters rattle off sentences like machine gun fire. But regardless of how witty the banter, or how acute the observation, the same rules of characterization apply. The words spilling from John or Jane Badass’s mouth must “sound” right to our inner ear in order for us to believe.

And in the crime/thriller genre, one other facet of storytelling is of utmost importance, the plot. If the story is too mundane, your charismatic characters will job in place, become stagnant, or worse yet, boring. No one reads a thriller to be bored. But if you go to far in the opposite direction, and don’t reign yourself in, the plot can become too twisted, too tangled, so that even the most observant, engaged, perhaps even note taking reader can become lost.

Some authors, the rarest of breed, can do all three and make it seem so easy.

Steig Larsson was one of those authors.

I was late to the party. At the time of The Girl with the Dragon Tattoo’s release, I was working sporadically in a chain bookstore. The book had received tons of praise, and even the most taste deficient/Dan Brown worshiping customers had sung it’s praises. Still, fearing it was just another Da Vinci Code scam, I held off on purchasing it.

Fast forward a few months, and I found myself at a used bookstore on a break from work. As usual, when I find myself surrounded by books, money has a way of jumping out of my pocket. That wrinkled Lincoln all but yanked the book from the shelf and carried it to the register on it’s own monetary power. When cash is that anxious to be spent, it’s wise to let it.

Smart move on my part.

I didn’t put the book down for days. I found myself walking to work, just so I could read instead of driving. And if you live in Maine, walking while reading is taking your life into your own hands. It’s not a pedestrian friendly state.

But I couldn’t help it. I wasn’t putting the book down. Not for work, for friends and loved ones, not even for an organ transplant. (Not that I was in line for one, but if I had needed a kidney, I would have held off until the book was finished.) And the strangest part of my absolute need to keep reading, I couldn’t tell you why. Sweedish libel cases. Who cares? Disgraced journalists and Goth/punk/chic girls. Sounds like the Washington Post covering Hot Topic.

The hard drinking, harder fighting PI that I love so much was nowhere to be seen. He was replaced with a middle aged journalist, who, at the very least, was a womanizer. I guess not everything has to change.  But the book pulled off the rare feet of absolutely mesmerizing me. It was honestly one of the best books I’d ever read.

So now I had a choice.

The Girl Who Played With Fire had just come out in hardcover. I wanted desperately to read it as soon as I closed the cover on its predecessor, but knowing the third and concluding book in the series was at least a year away left me a bit timid to start. If TGWPWF was the equal of TGWTDT, it would be the literary equivalent of waiting for Return of the Jedi.

So now I had a tough choice.

I waited. Until now.

With the release of The Girl Who Kicked the Hornets Nest a mere month away, I figured it was safe to start the middle novel. But to be on the safe side, I did pre-order TGWKTHN. Knowing it would be on my doorstep within thirty days, pushed me to stop making excuses and hurry up and read.

It was so very, very good. It’s safe to say, had I read this book back in September, I would have taught myself Sweedish, purchased a foreign edition from Amazon.uk.

Right from the beginning, we’ve got Lisbeth Salander, the titular character, and one of the most amazing modern literary creations, vacationing away in the tropics. She’s been living off the funds she ingeniously procured for herself at the end of the first novel. She’s living the life, but still doing the quirky, personally invasive things that she does best, until an unusual hurricane/tornado (foreshadowing!) sends her back home.

Once back in Sweeden, we catch up with Blomkvist, the formerly disgraced journalist, who is now the talk of the town. He’s steering his magazine Millenium, through some prosperity. They are on the verge of publishing a special issue, as well as a book by Dag Svennson. The hard hitting book, much like Blomkvists, threatens to expose a prospering sex trade in Europe.

This is more like it. While the premise of Tattoo had to win me over, Fire had me at “sex trade.” I cannot tell you why this subject interests me so much, and I’m not sure if I could afford the therapy that might give me the answer. But books like Greg Rucka’s Walking Dead, Garth Ennis’s Punisher story The Slavers, and even the movie Taken have left me fascinated with such a horrific part of today’s world.

As one would think, a book where politicians, judges, the police, and even various underworld figures, would be exposed and named, leaves many people unhappy. I was not shocked when Svennson and his girlfriend Mia Johonson, herself deeply involved in the cause, are found murdered. However, my jaw did need to be picked off the floor when Salander was the chief suspect.

And in a book with many shifting narratives, it was brave as hell to stop following Lisbeth around for over a hundred pages. Her point of view had been so prevalent to this point, that excluding her made her guilt seem reasonable. While unflattering, the portraits painted of her by psychologists and law enforcement were accurate, and when her tormentor from the previous novel, Nils Bjurman, ends up dead in an eerily similar manner, her guilt is a real possibility.

That’s as far as I’m going to go. Seriously, I want nothing more than to spoil this book for you. I can talk about all the great new characters that pop up. We’ve got the task force that is assigned to catch Lisbeth; Jan Bublanski, Officer Bubbles; his second in command Sonja Modig, a complete douchebag in Faste, and honest to goodness, a guy named Jerker Holmberg. And opposite the cops, you’ve got an unnamed Giant, a biker gang, and the most mysterious criminal mastermind this side of Keyser Soze, the once named "Zala".
Who he is might be the best reveal I've read in ages.
Remember when I made that Star Wars comparison? It was apt. This book was the equivalent, in mood, tension, and possibly despair, of The Empire Strikes Back. That’s high praise in the nerd circles I run in.  You invoke the Holy Trilogy, you better mean it.

And even though I only have a few weeks to wait until Hornets Nest, it is far too long.
Posted by Dan Fleming at 9:48 AM