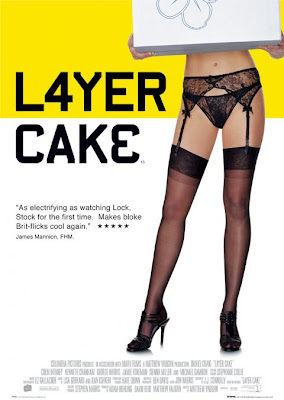 Before he was Bond, James Bond, Daniel Craig was only known to me as Paul Newman's creepy son in Road to Perdition and the unnamed lead in a little film called Layer Cake.  Directed by Guy Ritchie Producer, Matthew Vaughn, this movie went on to make stars of them both.

Craig plays Mr. X, a hard working, rule abiding cocaine dealer.  He's worked hard, he's worked smart, and now he's ready to get out of the game.  As a favor, his boss, Jimmy Price, asks him to complete two final jobs, neither of which he feels particularly comfortable with.  The first involves locating Charlie, the daughter of a friend.  She's disappeared into the underworld, and ironically enough, seems to be a coke fiend.  The other job involves purchasing a million hits of ecstacy from a low level hood named Duke.  Before he really manages to make any headway with either job, he manages to piss off Eddie Temple (Michael Gambon), Charlie's father, and Duke, who quickly finds himself dead.  Seems Duke ripped the drugs off a Serbian war criminal named Dragon.  Now Dragon wants a piece of Mr. X, and to make matters worse, it's quite apparent that Jimmy has set Mr. X up for a fall.  And while Mr. X has never fancied himself a "gangster," he might have to act like one to survive.

Some words about Craig's performance.  He's absolutely fantastic, and it's easy to see why MGM handed him the license to kill.  His facade is nearly unbreakable, holding on with those steely blue eyes.  Even when faced with outrageous situations, he manages to express complete control, even when he's not.   As a gangster, he is completely believable.

Besides Craig, some supporting characters do nice work. Tabloid fodder Sienna Miller shows some actual talent as the requisite femme fatale, Tammy. I know, its not the greatest name for a seductress, but it's the only thing about her that doesn't work. Just kidding. She doesn't do a damn thing but look good in underpants.  But Colm Meany holds his own as Jimmy's Right Hand Man, Gene.  He's got that weary soldier vibe going on, and doing it well.  George Harris, as Mr. X's associate Morty, delivers one of the best on screen beat downs I've ever seen. It was vicious, brutal, oddly humorous, and completely deserved.

But the true star of the film is Michael Gambon, particularly his voice. So measured, so pregnant with reason. It's difficult not to accept every word that flows like lava from his lips as gospel. You know he's a villain, yet each syllable is hypnotic. As Dumbledore in the Harry Potter franchise, that particular orating skill is comforting. Each student at Hogwarts knows they are protected, and in good hands. But in Layer Cake, each time Gambon speaks, my balls shrivel up the tiniest bit. It's a voice to be frightened of, and obeyed.

The script by JJ Connolly was adapted from his own novel, and while it is undeniably British, it's nice not to need a slang dictionary to decipher every phrase for us Yanks. While not as quotable as, say, 44 Inch Chest, it's rock solid, and full of believable twists, turns, double crosses and characterization.He has yet to follow it up with another screenplay.

Its hard to believe this was Matthew Vaughn's rookie output.  The film has excellent visual flair, without going over the top, as a certain friend of his has the tendency to do.  There is plenty of great camera work, with interesting, but not derivative, angles, nice cuts, flashy montages, and solid storytelling with an excellent choice of color palette.   And if he had anything to do with the music selection, than he might actually be certified as a genius. The Cult's She sells Sanctuary, Duran Duran's Ordinary World, and crime film staple, Gimme Shelter by the Stones all make well timed appearances.  Throw in some Kylie Minogue and Sciccor Sisters, and you can call the soundtrack down right eclectic.

Mr. Vaughn has only gone on to direct two more films since; the underrated, but fantastic Neil Gaiman adaptation Stardust and the recently released insanely fun Kick-Ass!  He's just signed on to direct the next X-Men sequel, and after the mediocre Wolverine and X Men 3, I'm sure he's going to turn that franchise around.  Hopefully sometime after that, he can get around to directing another crime film.