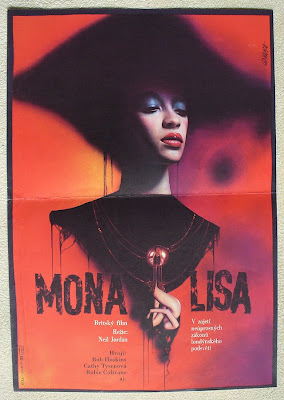 George (Bob Hoskins) is a petty criminal without much of a life to return to when he gets out of jail after a seven year stretch.  He's got his book loving best friend, Thomas (Robbie Coltrane), and not much else.  He goes to his old employers and is thrown a bone; he will be the driver for a young, beautiful call girl, Simone (Cathy Tyson).

It's not a job he particulary enjoys.  At first they hate each other.  She sees him as cheap, low class, and out of place.  He dismisses her as a "tall tart" who is a bit uppity for a whore.  So you know as the movie progresses they will like each other quite a lot.  In a nice bit of role reversal, she gives him the Pretty Woman treatment.

It's necessary.  She caters to the high class, and she can't have him waiting around in hotel lobbies in a Hawaiian shirt and gold medallion.  When not meeting the wealthy and influential, she has him drive through the streets of Kings Cross, starring at the menagerie of flesh, hoping to catch a glimpse of a girl she once knew and left behind.

During one drive, a street girl and her pimp recognize Simone.  The pimp attempts, well who knows what he was going to do, because George kicks the hell out of him.  They leave hastily, and soon Simone is sharing her story.  It's this girl, Cathy, that drives the narrative from this point forward.  They need to find her, and rescue her from Simone's old pimp, Anderson (Clarke Peters).  He agrees.

Soon he's patronizing Peep Shows and Strip Clubs, searching for the Little Lost Girl.  But the more he searches, the more he comes across his boss, Denny Mortwell (Michael Caine).  All the warning signs are there for him to stop, but as George even says, he's not good at seeing what's in front of his face.  It's no surprise when situations start turning violent and bloody.

Bob Hoskins was nominated for an Academy Award for this performance, and it's not a shock.  He plays George as a wounded man, just looking for his place in the world.  While he is often tender and understanding, he is quite capable of anger and violence.  But his is not the only good performance.  Coltrane is a rock as his best friend, trying to offer advice whenever he can.  Cathy Tyson is alluring as Simone, and she certainly keeps her secrets behind a smile.  And as always, Michael Caine is excellent.

It's odd that I've never heard this film compared to Taxi Driver, as many of the themes and scenes are similar. But while that film was filthy and street level, Mona Lisa presents itself, much like Simone, as something else, something classy, despite the seedy underbelly.  Discovering the sordid secrets is what makes this movie first class.