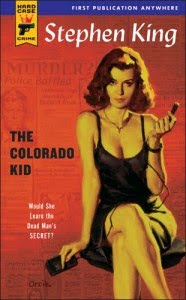 The silly named Syfy network has started production on Haven, a hour long drama based on Stephen King’s Hard Case Crime novel, The Colorado Kid.The show, which will air on SyFy July 19 at 10 p.m., follows a shrewd FBI agent Audrey Parker (Emily Rose of Jericho and ER) with a lost past who arrives in a small town in Maine to investigate a murder. She soon discovers that the town, Haven, is a refuge for people with a range of supernatural abilities.
Haven also stars Eric Balfour (the creepy tall thin dude with the silly facial hair who seems to either destroy every show he is on, or is just plain annoying on the good shows on which he does manage to appear.  Seriously, what does this guy have on producers?) as the mysterious Duke Crocker and Lucas Bryant, a guy I've never heard of, as local cop Nathan Wuornos.

The pilot is directed by Adam Kane (The Mentalist, Pushing Daisies), and written by The Dead Zone (the other Stephen King based show which, because of my love for the movie, and the fact that I'm creeped out by a buff Anthony Michael Hall, have never seen) team of Sam Ernst and Jim Dunn, who serve as executive producers of the series. Scott Shepherd (Tru Calling, The Dead Zone) is the showrunner.

From everything I've read, The Colorado Kid novel is going to be the backstory of the television show.  It's been a long time since I read the book, but that seems like a good idea.  While the novel was a great read, I certainly can't see that one particular story being anything more than a mini-series.  As a springboard, it might work.

I'm of two minds concerning this news.  As a Maine resident, I'm almost legally obligated to love and enjoy all things Stephen King.  Most of the time, that's not a problem.  The television shows/miniseries have run hit and miss for me, with the one highlight of years past being the criminally ignored Kingdom Hospital.  That was a show that could have held on for years had the average American television viewer had an attention span longer than this sentence.  So, another television show leaves me skeptical, especially on SyFy, the same network that brings us an insane amount of garbage.

But, this was the book that brought me into the Hard Case Crime series, thus beginning a years long love affair.  And the story was good!  Very few mystery stories have the balls to not actually solve the mystery on which the book is about.  Quite brave.

So, based on my loyalty to the book, and despite everything going against it, I will watch this show once it makes it on the air.  I have no hopes that it will be either good, or last longer than an episode or two, but I hope I am wrong.  In the meantime, I will definitely re-read the book before then.
Posted by Dan Fleming at 11:23 AM