You have one week to read this 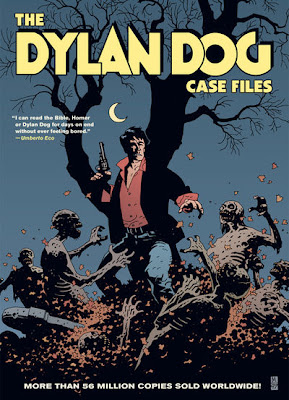 before you see this.

If you've never read any of the Dylan Dog Casefiles, you owe it to yourself to do so.

Nightmares can't hurt you. There's no such thing as the walking dead. Monsters are all in your imagination. We tell ourselves these things to make us feel safe at night, to give us strength against the unknown.

But there are things in the dark that can hurt us. Just ask Dylan Dog.

An ex-cop who now battles against evil as a "nightmare investigator," Dylan Dog is unlike any private eye you've ever met. If creatures from beyond the unknown are after you, and if you can hire him, he just might save your life.

And I am very excited about this movie.  Brandon Routh is a terribly under-appreciated actor who deserves more roles.  His Superman was spot on and he nearly stole Scott Pilgrim in the ten minutes he had of screen time.  And with Dylan Dog that gives him three comic book films, moving him into the pantheon of geek heroes alongside Chris Evans and Ryan Reynolds.
Posted by Dan Fleming at 9:22 AM