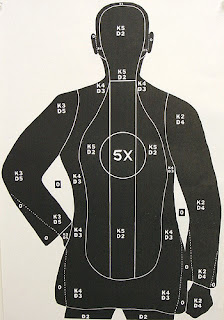 Those of you who know me accept me, for the most part, as the radical-pinko-commie-bleeding heart-hippie-leftist-liberal that I am.  I believe in things like free speech, choice, abolition of the death penalty, socialized medicine for all, better funding for the arts, and a hand up for those in need.  All of these qualities immediately identify me and move me to my seat on the left, where I rightly belong.  But guess what?  I also love guns.

I feel everyone, with the exception of the mentally unbalance, the criminally convicted, and men named Myron, should own a gun.  (Should I mention that I don't currently own one?)  It's an important right, and as my friend Joe often says, it's the only thing that keeps us from being subjects instead of citizens.  He's not screaming to the mountains calling for armed revolution and stapling tea bags to his hat, but I understand what he means.  If the government should one day become far too powerful (and yes I hear you Far Right Wing People, but fuck off, they are not that powerful) a gun is the only thing that might keep you free.  That and a well stocked bomb shelter.

So despite not owning a gun, I thoroughly enjoy shooting them with my friends.  My lack of firearms is forgiven, and my chums allow me to fire their vast collection of weapons.  Seriously, should there ever be a Zombie Uprising, I know exactly whose house to run to.

Today, I am going to pop off a few rounds at a local sand pit/deserted piece of woods.  This is Maine.  I'm sure there are indoor ranges and gun clubs, but here, we shoot in nature.  Don't worry.  We don't shoot at small woodland animals, and as of yet, no people.  Okay, we shoot at cardboard standees of people.  A few years back a Matt Damon/Jason Bourne and Lindsay Lohan/Mean Girls display saw the business ends of a few rounds.  And Joe has a mean-on for quarters.

But anything breathing is safe.

Pictures will come soon.
Posted by Dan Fleming at 9:57 AM