A Drop of the Hard Stuff

"When I was on the job," I said, "it was said of me that I was like a dog with a bone.  Just because I've let go of something doesn't mean I can keep from thinking about it." 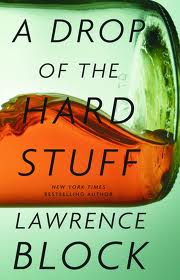 I wouldn't be reading crime fiction if not for Lawrence Block.  My reading interests have always been varied, from the required classics to Chuck Palaniuk, but prior to Mr. Block, I hadn't touched a single page of crime other than Sherlock Holmes.  The genre was not shunned on purpose, I just hadn't given it a fair shake.  That changed the day I picked up A Dance at the Slaughterhouse.  Within those pages I was introduced to the burned out ex-cop/not private eye Matthew Scudder.  His world was bleak, dangerous, and completely captivating.  By books end I had promised myself to read every word printed concerning him.

It's about ten years later, and sadly I have a few books left unread.  But in preparation for A Drop of the Hard Stuff's arrival, I dug out my books, picked up a few more and proceeded to read:

Thats a pretty full two months, and in all honesty it was worth the time to catch up with an old friend.  To me, Matthew Scudder is like that grizzled old uncle who shows up a bit drunk at the reunion, tells amazing stories, sneaks you a beer, and ends up punching someone.  The rest of the family might be slightly embarrassed by his antics, but you can't help wanting to be him just a little.

The earlier Scudder novels were filled with booze, broads, and endless cases.  Matt was the first private investigator, unlicensed or not, who tried as hard as possible to never ever take a case.  But like the opening quote stated, when he took a job, he stayed on until it was finished.  His personal life would suffer, his friendships would suffer, and in the beginning his sobriety suffered.

And then Lawrence Block went and did something completely unexpected, he sobered Matt up.  Sent him off to AA and put him through the steps.  Would a clean and sober Matt be as interesting?

Cut to the book that arrives in stores tomorrow, A Drop of the Hard Stuff.

It might not be Block's best book, but it's a welcome addition to the series.  Taking place entirely in a previously untold flashback, it tells the story of a case Matt takes on as he nears his one year sobriety anniversary. An old acquaintance of Matt, former criminal "High-Low" Jack Ellery has turned up dead after recently reconnecting with Matt at a meeting.  Jack's sponsor believes it has something to do with a particular AA step, making amends to those he might have wronged.  It seems Jack wronged quite a few people.  Instead of turning over Jack's list to the police, the sponsor hands it over the Matt, hoping he will clear names that the police would instead look into.

As one would guess based on past experience, Matt is reluctant, but takes the money and the job.  In typical Block fashion, Matt works the case slowly and methodically, asking all the right questions to all the right people (including a few welcome series regulars like Danny Boy Bell) and before long he's dug deep enough to unravel the mystery.  It should come as no surprise, because Scudder has always been good at what he does.

And like the past books, it's not always about the mystery.  Matt is a complicated character, and it's his struggles with the bottle, women, and his life that always keep me coming back.  He's not that hard of a man that you can't help but feel for him as he is tempted by the neon promises of local bars.  Having gone through similar problems, Lawrence Block lends the book much needed realism behind Matt's struggles.

The only problem I had with the book was it's ending.  Back in the day Matt handed out some rather unusual forms of justice, and he wasn't above coaxing a suicide or letting a man like Mick Ballou take care of the dirty work.  Sometimes he did what needed to be done himself.  It's a trait of Matt's I always admired.  Sadly, without giving aways the ending, I found the last few pages of this book to be rather passive.  Perhaps Block has moved past the need to have Matt dole out some justice on his own terms.

I, however, have not, and it left me wanting a little more.

Would that stop me from recommending A Drop of the Hard Stuff?  Not a chance.

A Drop of the Hard Stuff will be published by Mulholland Books tomorrow.
Posted by Dan Fleming at 12:43 PM