To the Mattresses Week 3 - Just a Gigalo 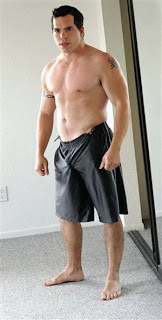 
The Shady Lady Ranch successfully won state and county approval to clear the way for the "prostidude," as Nevada's newest sex worker is already being called. After a slow first week on the job, his first appointments are scheduled for this weekend.

The male prostitute - known as "Markus" - has quickly become the center of attention in Nevada's brothel industry.


He has been criticized by female counterparts for not being willing to have sex with men. And he created a dust-up after telling Details Magazine that his pioneering role in the sex business was "just the same" as civil rights icon Rosa Parks refusing to give up her seat and move to the back of the bus. Not surprisingly, he has been forbidden from doing interviews after the remarks.

Competing brothel owners also fret that hiring gigolos in Nevada will bring unwanted scrutiny from state officials, potentially tempting them to make prostitution illegal. The competitors have also expressed concerns about sexually transmitted diseases, and worry that female customers can't be inspected as carefully as men are before sex.


Shady Lady madam Bobbi Davis picked him from about 10 potential hires culled from hundreds of applications, many featuring crude inquiries, according to her husband and co-owner Jim. Part of Markus' appeal was that he was not afraid to deal with heavy publicity.


"Whichever woman may walk through that door, she's appreciated," Markus said in his Details interview. "A surrogate lover will love that woman for a whole hour, or however much we charge here, and she'll leave feeling much more empowered and much more confident in herself."


Jim Davis told The Associated Press that after reading the article, he and his wife decided that Markus doing interviews was bad for business. Bobbi Davis declined an interview with the AP. The Davises declined to give Markus' real name, which is customary for sex workers in Nevada.


Davis said the Shady Lady had received dozens of e-mails expressing interest in the gigolo. He said it took years to establish steady business from truckers, salesmen and other travelers after the brothel opened 17 years ago, and getting paying women customers could take at least a month.


"This is a business - if (Bobbi Davis) didn't think she could make more money she wouldn't have done it," Davis said. "Why else would she start something like this?


"And if she knew what she was getting into, she probably wouldn't have," he said.


The yellow-painted Shady Lady compound is more than 30 miles north of Beatty - an unincorporated township of less than 1,200 people between Las Vegas and Reno.


The small, fenced-in brothel includes a French-themed foyer that displays a pricing menu - $200 for 40 minutes, $300 per hour. It sits on 40 acres of mostly empty land the Davises originally bought for $11,000, Davis said.


Three connected bedrooms are distinctly decorated. One has a heart-shaped hot tub in its bathroom, another has an Asian theme. The brothel's newest space is a disconnected cottage that looks like a roomy studio, with a kitchenette, a wooden bathtub in the bedroom and armrests on the toilet. The cottage cost $50,000 to build, Davis said.


Markus plans to use the cottage.


"It won't be successful," said Arie Mack Moore, owner of the Angel's Ladies Brothel, about two miles north of Beatty. "You can't have both (male and female prostitutes) in the same building or adjacent to each other, in my opinion."


Moore claims his business has picked up since Markus was hired, with customers saying they wanted to avoid the Shady Lady because of Markus.


Davis said that he and his wife aren't interested in establishing a gay male clientele, but it will be up to Markus to decide whether to accept men as customers. Davis said Markus told him that he wouldn't perform for male customers.


"All this gay homophobia in this country is horrible," Davis said. "Everybody's so damn scared two men might have sex - it's happening every day in Las Vegas. Not going to happen here, but that's all the big fear, is gay people."


George Flint, a longtime lobbyist for the Nevada Brothel Owners Association, said allowing a male prostitute creates legitimate health concerns. Male customers are thoroughly cleaned and inspected for signs of disease before sex at Nevada's brothels, and he doesn't believe the same "fanaticism" is possible when checking female customers.


He also worries about the ramifications for the six other brothels in Nye County and the 24 total in Nevada.


"We got an industry in this state right now that's got an investment of somewhere between $50 million and $75 million," Flint said. "And yet Bobbi's in the catbird seat right now where her antics and her procedures and her demands and her goals could potentially bruise an entire multimillion-dollar-a-year industry."


Flint said he believed the Shady Lady Ranch, which is not a part of his association, could see a temporary wave of curious female customers, but the experiment will ultimately fail.


"I think she truly believes that it's a viable effort, and I'm wondering after four or five days and there haven't been any takers, if she's beginning to wonder if maybe she was wrong," Flint said. "You and I and the rest of the world can sit and debate this damn thing until hell freezes over, but if nobody shows up at her front door, what's it proved?"


A service of YellowBrix, Inc. .


So technically there is no crime involved, as this dude is too legit to quit.  But it will be very interesting to see what effect this will have on prostitution.  Do that many woman even go to gigolos?  I know Patrick Dempsey made it pretty popular in that one movie of his, but I don't see women lining up around the block to obtain this guys "services."

I'll be keeping an eye on this.